↓
Home→Beliefs About the Body of Christ→Remnant and Its Mission - Fundamental Belief 13→Evangelism→Is the Right Arm Still Good?

I remember Lizzie amazing me with her ability to do most of what I could do as well as I could or better. She could plant, cultivate and harvest a garden, she could cook and bake bread, she could sew – all without a right arm. But if Jesus had offered to give her a right arm, I doubt that she would have refused.

Some also seem to manage fairly well without the “right arm” of the three angels’ messages – giving Bible studies, holding evangelistic series, sharing their faith with their neighbors (rarely). 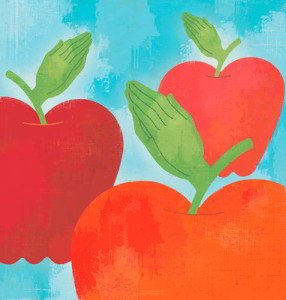 I remember a board meeting in which the pastor was concerned about a plan to put on a health program. He wanted to make sure that we did not “shove the health message down peoples’ throats.” Sure, he knew it was “the right arm” of our message, but people had to do it “on their own time.” For him 30 years as a pastor clearly wasn’t enough to implement it in his own life.

But would we not be able to do much more if we employed the “right arm” ?

The Bible study on “Christ’s Healing Legacy” demonstrates that Jesus, our Example, went around healing people – ministering to their felt needs – before he asked them to follow Him.1 The hearts of those He healed physically were wide open to His message of spiritual healing.

Following the example of Jesus, I have observed medical personnel and trained church members put on health programs, such as CHIP. 2 However, they were very careful not to “shove religion down peoples’ throats.” They took down posters advertising an upcoming evangelistic series, lest people “get the wrong idea” – that they are “after them” for spiritual reasons. And they avoided talking about spiritual things. They were successful in helping people become physically healthy, while they failed to address the diseases of the soul that will drag them to eternal oblivion.

It seems to me that putting money and effort into health programs for the public without intentionally leading them on to spiritual health is a misuse of the Lord’s goods – His money and His time entrusted to us. And attempting to minister to the world without a right arm is also a foolish waste of God’s gifts

So how do we properly use this “right arm”?

I have mentioned health programs, and there are some excellent programs that can help us experience the gospel of health for ourselves and train us to share the same with others. But I want us to think about our attitudes first.

The gospel is literally “Good News” – the Good News that God Himself took on human flesh to live among us to demonstrate His character and to die for us in an ultimate act of self-sacrificing love. If we really care for our neighbors, will we not want to share this good news with them in the most tactful and engaging manner possible?

Christ mingled with the people of His time, demonstrated an interest in them, and ministered to their felt needs to gain their confidence. And then He invited them to follow Him. His methods will still meet with success.

Just the other day, I shared a health tip with someone who had been a bit defensive in my Sabbath School class. However, after she found that my sharing met her need, she immediately followed up with a spiritual question. It’s a pattern often repeated, and it demonstrates the effectiveness of using the right arm.

It is, of course, possible, to share healthy living information without any spiritual aspects. Many can fill that role, including New Age gurus. It takes conscious thought to share in such a way that the spiritual connection is evident, but it isn’t difficult, because modern medicine has discovered the “spiritual connection.’ 3

It is also possible to be a “health fanatic” – a person out of balance, focusing on health at the expense of relationships. I know of good Adventist Christians who have eaten quite “unhealthful” food in order to nurture a relationship, while others have sacrificed relationships in the name of health. What example did Jesus set?

How hard is it, really?

There are only eight “true remedies.”

Pure air, sunlight, abstemiousness, rest, exercise, proper diet, the use of water, trust in divine power—these are the true remedies. Every person should have a knowledge of nature’s remedial agencies and how to apply them. It is essential both to understand the principles involved in the treatment of the sick and to have a practical training that will enable one rightly to use this knowledge. (Ellen G. White, Counsels on Health, p. 90)

In the 1800’s, a young man studied medicine and then applied these eight principles in his treatment program. And he built a lifestyle center (then known as a “sanitarium”) that became world-famous, drawing the rich and the famous from all parts of the world.

What influence would we, as a church, have today if we each put these principles into practice in our own lives?

Food for thought, I think …

What experience can you share about the "gospel of health"? Cancel reply