↓
Home→Daily→Tuesday: The War on Earth 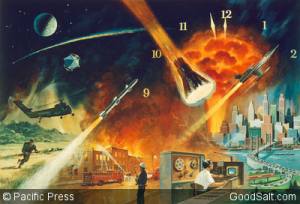 “The casting down of Satan as an accuser of the brethren in Heaven was accomplished by the great work of Christ in giving up his life. Notwithstanding Satan’s persistent opposition, the plan of redemption was being carried out. … Satan, knowing that the empire he had usurped would in the end be wrested from him, determined to spare no pains to destroy as many as possible of the creatures whom God had created in his image. He hated man because Christ had manifested for him such forgiving love and pity, and he now prepared to practice upon him every species of deception by which he might be lost; he pursued his course with more energy because of his own hopeless condition”. – Ellen G. White, The Spirit of Prophecy, vol. 3, pages 194, 195.

No question, Satan continues his activities on earth by pouring his fury against the great object of Christ’s love on earth – the church. However, the church finds divine protection in the desolate, wilderness places of the earth during the prophetic period of 1,260 days/years.

The period of Satan’s persecution is mentioned twice in Revelation 12 in terms of 1,260 days/years (Rev. 12:6) and “a time and times and half a time” (Rev. 12:14, NKJV). Both time periods refer to the duration of the little horn’s persecuting activity mentioned in Daniel 7:23-25. In the Bible, prophetic days symbolize years. The time in history that fits this prophetic period is A.D. 538-1798, during which time the Roman Catholic church, as a church-state power, dominated the Western world until 1798, when Napolean’s General Berthier brought Rome’s oppressive power to an end, at least temporarily.

During this long period of persecution, the dragon spews flooding waters out of his mouth in order to destroy the woman. Waters represent peoples and nations (Rev. 17:15). Armies and nations were sent by Rome against God’s faithful people during this time. Near the end of this prophetic period, a friendly earth swallows the waters and saves the woman, providing a safe haven for her. This provision points to the refuge that America, with its religious freedom, supplied (Rev. 12:16).