Read 1 Peter 3:1-7. What special circumstance is Peter addressing in this passage? How is what is said relevant to marriage in today’s society?

There is one significant clue in the text that enables the careful reader to work out the issue that Peter deals with in 1 Peter 3:1-7. In 1 Peter 3:1, Peter says he is talking about husbands who “obey not the word.” 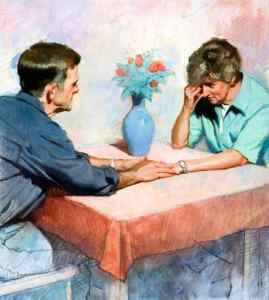 In other words, Peter is talking about what should happen when a wife who is a Christian is married to a husband who is not (even if the number who don’t believe are few).

A Christian wife would find many difficulties being married to a husband who does not share her faith. What should happen in these circumstances? Should she separate from her husband? Peter, like Paul elsewhere, does not suggest that Christian wives leave their nonbelieving husbands (see 1 Cor. 7:12-16). Instead, says Peter, wives with a husband who is not a believer must live exemplary lives.

The roles available to women in the first-century Roman Empire were determined largely by the individual society. Roman wives, for example, had more rights under the law regarding property and legal redress than would most of the women to whom Peter is writing. But in some first-century societies, women were excluded from involvement in politics, government, and leadership in most religions. Peter urges Christian women to take on a set of standards that would be admirable in the context in which they found themselves. He urges them to purity and reverence (1 Pet. 3:2, NRSV). He suggests that a Christian woman should be more interested in her inward beauty than in the adornment of fashionable hairstyles, jewelry, and expensive clothing (1 Pet. 3:3-5). A Christian woman will conduct herself in a manner that will recommend Christianity to the one who lives with her in a most intimate manner-her husband.

Peter’s words should not be taken by husbands as a license to mistreat their wives in any way. As he points out, husbands should show consideration to their wives (1 Pet. 3:7).

While Peter is addressing a specific issue-Christian wives married to nonbelievers-we can see a little of the ideal of Christian marriage: Christian partners should live in mutual support, living their lives with transparent integrity as they worship God through their everyday activities.