Pius Kabadi Tshiombe, a 53-year-old lay evangelist, boarded the An-2 single-engine biplane for a flight to visit a church that he planted in a remote region of the Democratic Republic of Congo. 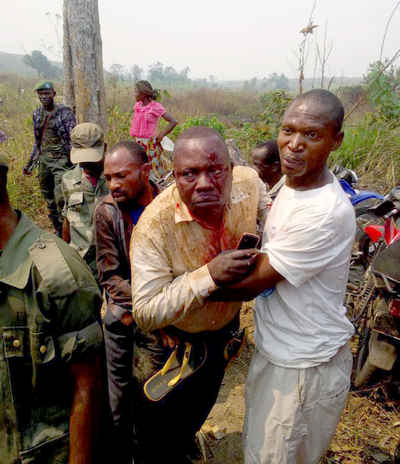 But the Soviet-built plane operated by Kinshasa-based Air Kasai developed engine trouble shortly after taking off from Kamako for the 90-mile (150-kilometer) flight to Tshikapa, located near the border with Angola. As the pilot looked for a place to land, the plane lost altitude, and smoke filled the cabin. Pius saw the pilot emerge from the cockpit. “Follow the pilot”, a voice seemed to say.

Pius sprang to his feet. The pilot opened an exit and jumped out. Pius also jumped. Moments later, the An-2 slammed into the bush and burst into flames. The crash occurred about 2 miles (3 kilometers) from the Kamako airport on July 27, 2018. Only Pius and the pilot survived; the other five passengers died.

“He survived with only his cellphone”, said Pius’ wife, Nicole, who received confirmation about her husband’s condition via WhatsApp photographs sent by a friend after the crash. “He had a head and leg wound but no broken bones”.

Among the photos was one of Pius, dazed and wearing a blood-soaked shirt, with a cell phone in his hand. Nicole was unable to speak with her husband for three days, but his first words by phone were filled with praise to God.

“I will never leave this God”, he told her. “He is wonderful”.

Pius had wanted to visit a small church plant of 15 people that he opened after evangelistic meetings in Kabungyu. But he ended up on the An-2 on a Friday after learning that his desired flight left on Saturday.

“They told him that he would have to travel on the Sabbath”, his wife said. “He said, ‘I can’t because I worship on Sabbath.’ But they said, ‘The flight only goes on Saturday.’ He said, ‘I’ll find another way to reach my destination.’”

Pius, pictured, called his wife from the airport to announce his change in plans. He hoped to find a new way to connect to Kabungyu.

Nicole has many questions about what happened. She doesn’t understand why only Pius and the pilot survived. She doesn’t know whether Pius’ decision to keep the Sabbath played a role in the story. But she believes that he was delivered as promised in Psalms 91:14, where the Lord says, “Because he has set his love upon Me, therefore I will deliver him” (NKJV).

“Be faithful to God because he can protect us at all times”, she said.