Read Revelation 6:3-4. On the basis of the description of the red horse and the rider, what is being talked about here in reference to the gospel?

Red is the color of blood. The rider has a great sword and is allowed to take peace from the earth, which opens the way for people to kill one another (Matt. 24:6). 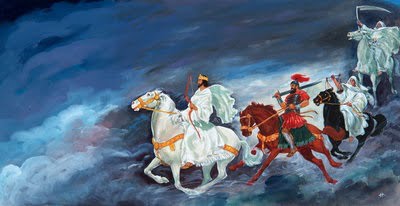 The second seal describes the consequences of rejecting the gospel, beginning in the second century. As Christ is waging spiritual warfare through the preaching of the gospel, the forces of evil render strong resistance. Inevitably, persecution follows. The rider does not do the killing. Instead, he takes peace from the earth. As a result, persecution inevitably follows. (See Matt. 10:34).

Read Revelation 6:5-6 along with Leviticus 26:26 and Ezekiel 4:16. On the basis of the description of the black horse and the rider, what reality associated with the preaching of the gospel is referred to here?

The rider on the black horse holds a scale for weighing food. An announcement is made: “A quart of wheat for a denarius, and three quarts of barley for a denarius” (Rev. 6:6, NKJV). In that part of the world, grain, oil, and wine were the basic necessities of life (Deut. 11:14). To eat bread by carefully weighing the grain denoted great scarcity or famine (Lev. 26:26, Ezek. 4:16). In John’s day, a denarius was a daily wage (Matt. 20:2, NKJV). In normal circumstances, a daily wage would buy all the necessities for the family for that day. However, a famine would enormously inflate the normal price of food. In the scene of the third seal, it would take a whole day’s work to buy just enough food for only one person. In order to feed a small family, a day’s wage would be used to buy three quarts of barley, a cheaper, coarser food for the poor.

The scene of the third seal points to the further consequences of rejecting the gospel, beginning in the fourth century, as the church gained political power. If the white horse represents the preaching of the gospel, the black horse denotes the absence of the gospel and the reliance on human traditions. Grain in the Bible symbolizes the Word of God (Luke 8:11). The rejection of the gospel inevitably results in a famine of the Word of God similar to the one prophesied by Amos (Amos 8:11-13).