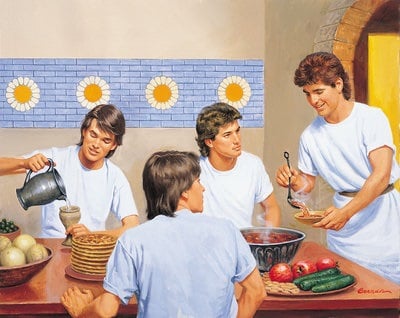 Before we can understand the phrase “the works of the law,” we first need to understand what Paul means by the word law. The word law (nomos in Greek) is found 121 times in Paul’s letters. It can refer to a number of different things, including God’s will for His people, the first five books of Moses, the entire Old Testament, or even just a general principle. However, the primary way Paul uses it is to refer to the entire collection of God’s commandments given to His people through Moses.

The phrase “the works of the law” likely involves, therefore, all the requirements found in the commandments given by God through Moses, whether moral or ceremonial. Paul’s point is that no matter how hard one tries to follow and obey God’s law, our obedience never will be good enough for God to justify us, to have us declared righteous before God. That’s because His law requires absolute faithfulness in thought and action — not just some of the time but all of the time, and not just for some of His commandments but for all of them.

Although the phrase “works of the law” does not occur in the Old Testament and is not found in the New Testament outside of Paul, stunning confirmation of its meaning emerged in 1947 with the discovery of the Dead Sea Scrolls, a collection of writings copied by a group of Jews, called Essenes, who lived at the time of Jesus. Although written in Hebrew, one of the scrolls contains this exact phrase. The scroll’s title is Miqsat Ma’as Ha-Torah, which can be translated, “Important Works of the Law.” The scroll describes a number of issues based on biblical law concerned with preventing holy things from being made impure, including several that marked the Jews out as separate from the Gentiles. At the end the author writes that if these “works of the law” are followed, “you will be reckoned righteous” before God. Unlike Paul, the author does not offer his reader righteousness on the basis of faith but on the basis of behavior.