Smyrna was a beautiful and wealthy city but also was a center of mandated emperor worship. Refusing to comply with this mandate could lead to the loss of legal status, to persecution, and even to martyrdom.

Read Revelation 2:8-11. How does the way Jesus presents Himself to this church relate to the church’s situation? What was the situation of the church? What warning does Jesus give to the church about what was coming? 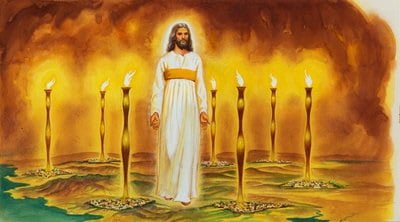 The message to the church in Smyrna applies prophetically to the church in the postapostolic era, when Christians were viciously persecuted by the Roman Empire. The “ten days” mentioned in Revelation 2:10 point to the ten years of the Diocletian persecution from A.D. 303 until A.D. 313, when Constantine the Great issued the Edict of Milan, which granted Christians religious freedom.

Pergamum was the center of various pagan cults, including the cult of Asclepius, the Greek god of healing, who was called “the Savior” and was represented by a serpent. People came from all over to the shrine of Asclepius to be healed. Pergamum had a leading role in promoting the cult of emperor worship, which, as in Smyrna, was compulsory. No wonder Jesus said that the Christians in Pergamum lived in the city where Satan’s seat is and where his throne was located.

Read Revelation 2:12-15. How does Jesus present Himself to this church? What was His appraisal of its spiritual condition?

The Christians in Pergamum faced temptations from both outside and inside the church. While most of them remained faithful, some, the “Nicolaitans”, advocated compromise with paganism in order to avoid persecution. Like Balaam, who apostatized and enticed the Israelites to sin against God on the way to the Promised Land (Num. 31:16), these members found it more convenient, and even rewarding, to compromise their faith. Though the Jerusalem Council had forbidden “things offered to idols” and “sexual immorality” (Acts 15:29, NKJV), the doctrine of Balaam taught church members to reject this decision. The only solution Jesus can offer to Pergamum is: “Repent” (Rev. 2:16, NKJV).

The church in Pergamum is a prophetic picture of the church from approximately A.D. 313-538. Although some members in the church remained faithful, spiritual decline and apostasy increased rapidly.