When Paul arrived in Jerusalem, he was warmly received by believers associated with Mnason, with whom he was to stay (Acts 21:16-17).

In Acts 21:18-22, James and the Jerusalem elders expressed their concerns about Paul’s reputation among local Jewish believers zealous of the Mosaic law. 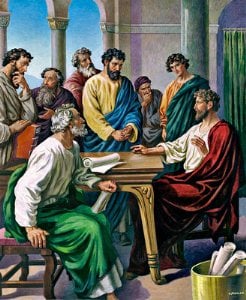 They had been informed that he was teaching the Jewish converts who lived abroad to forsake Moses, telling them “not to circumcise their children or observe the customs” (Acts 21:21, NRSV).

This, of course, was not really true. What Paul did teach was that, in terms of salvation, neither circumcision nor uncircumcision meant anything, as both Jews and Gentiles were equally saved by faith in Jesus (Rom. 2:28-29; Gal. 5:6; Col. 3:11). This is different from explicitly encouraging Jews to disregard the law and its requirements. Obedience is not, of course, in itself a synonym for legalism, though it could deliberately be twisted to mean just that.

Paul was advised to be politically correct. He should show the falsity of the rumors about him by doing something very Jewish: sponsor the Nazirite vow of some Jewish believers. This vow was a special act of piety through which a Jew would consecrate himself to God.

Unfortunately, Paul yielded. Heroes, including the biblical ones, have their flaws, as we can see in the lives of Abraham, Moses, Peter, and several others. It could be argued that Paul was just following his principle of behaving like a Jew when dealing with Jews (1 Cor. 9:19-23), or that he himself is reported to have taken a vow not long before (Acts 18:18), though the precise nature of this vow is not clear. This time, however, it was a compromise, as it signified his endorsement of the legalistic motives behind the recommendation. The implication of such an attitude was exactly the one the apostle vigorously tried to oppose: that there are two gospels, one for Gentiles, of salvation by faith, and another for Jews, of salvation by works. “He [Paul] was not authorized of God to concede as much as they asked.”—Ellen G. White, The Acts of the Apostles, p. 405.