↓
Home→Daily→Sunday: The Opening of the First Seal

Read Revelation 6:1-8 along with Leviticus 26:21-26 and Matthew 24:1-14. Note the common key words in these texts. What do you learn about the meaning of the first four seals on the basis of these parallels? 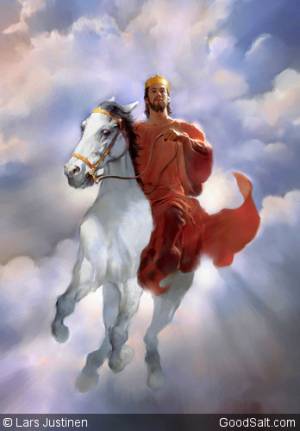 The events of the seven seals must be understood in the context of the Old Testament covenant curses, specified in terms of sword, famine, pestilence, and wild beasts (Lev. 26:21-26). Ezekiel calls them God’s “four severe judgments” (Ezek. 14:21, NKJV). They were the disciplinary judgments by which God, seeking to awaken His people to their spiritual condition, chastised them when they became unfaithful to the covenant. In a similar way, the four horsemen are the means that God uses to keep His people awake as they await Jesus’ return.

There also are close parallels between the first four seals and Matthew 24:4-14, in which Jesus explained what would happen in the world. The four horsemen are the means by which God keeps His people on the right track by reminding them that this world, as it now exists, is not their home.

Though symbolic, Revelation 6:1-2 is about conquest, too. It brings to mind Revelation 19:11-16, which portrays Christ as riding a white horse and leading His heavenly armies of angels to deliver His people at the Second Coming. As a symbol of purity, the color white is regularly associated with Christ and His followers. The rider on the horse holds a bow and is given a crown (Rev. 6:2), which evokes the image of God in the Old Testament, riding a horse with a bow in His hand while conquering His people’s enemies (Hab. 3:8-13; Ps. 45:4-5). The Greek word for the crown (Rev. 6:2) worn by the rider is stephanos, which is the crown of victory (Rev. 2:10, Rev. 3:11). This rider is a conqueror going forward conquering and to conquer.

The scene of the first seal describes the spread of the gospel, which started powerfully at Pentecost. Through the dispersion of the gospel, Christ began expanding His kingdom. There were, and still are, many territories to win and many people who have yet to become followers of Jesus before the ultimate conquest is realized with Christ’s coming in glory.

Prophetically, the scene of the first seal corresponds to the message to the church in Ephesus; it describes the apostolic period of the first century during which the gospel spread rapidly throughout the world (Col. 1:23).