Romans 16:1-2 indicates that Paul probably wrote Romans in the Greek city of Cenchreae, which was near Corinth. Paul’s mention of Phoebe, a resident of greater Corinth, establishes that place as the likely background for the letter to the Romans. 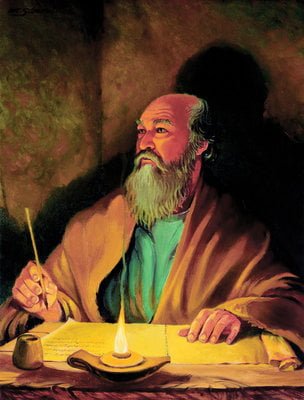 One of the purposes of establishing the city of origin of the New Testament epistles is to ascertain the date of writing. Because Paul traveled a lot, knowing his location at a particular time gives us a clue to the date.

What other important churches did Paul visit on his third missionary journey? Acts 18:23.

Visiting the Galatian churches, Paul discovered that during his absence false teachers had convinced the members to submit to circumcision and to keep to other precepts of the law of Moses. Fearing that his opponents might reach Rome before he arrived, Paul wrote a letter (Romans) to forestall the same tragedy from happening in Rome. It is believed that the Epistle to the Galatians also was written from Corinth during Paul’s three months there on his third missionary journey, perhaps shortly after his arrival.

“In his epistle to the Romans, Paul set forth the great principles of the gospel. He stated his position on the questions which were agitating the Jewish and the Gentile churches, and showed that the hopes and promises which had once belonged especially to the Jews were now offered to the Gentiles also.” – Ellen G. White, The Acts of the Apostles, p. 373.

As we said, it is important in the study of any book of the Bible to know why it was written; that is, what situation it was addressing. Hence, it is important for our understanding of the Epistle to the Romans to know which questions were agitating the Jewish and Gentile churches. Next week’s lesson will address these questions.