Read Galatians 3:1-5. Summarize below what Paul is saying to them. In what sense could we be in danger of falling into the same spiritual pitfall, of starting out right and then falling into legalism? 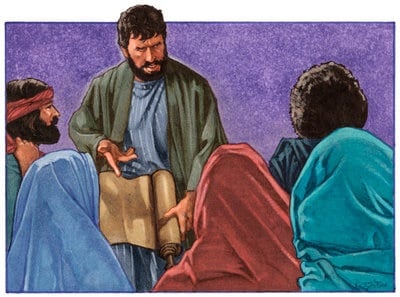 Several modern translations have tried to capture the sense of Paul’s words in verse 1 about the “foolish” Galatians. The actual word Paul uses in Greek is even stronger than that. The word is anoetoi, and it comes from the word for mind (nous). Literally, it means “mindless.” The Galatians were not thinking. Paul does not stop there; he says that, because they are acting so foolishly, he wonders if some magician has cast a spell on them. “Who has bewitched you?” His choice of words here may even suggest that the ultimate source behind their condition is the devil (2 Cor. 4:4).

What baffles Paul so much about the Galatians’ apostasy on the gospel is that they knew salvation was rooted in the Cross of Christ. It was not something that they could have missed. The word translated “portrayed” or “set forth” (KJV) in Galatians 3:1 literally means “placarded” or “painted.” It was used to describe all public proclamations. Paul is saying that the Cross was such a central part of his preaching that the Galatians had, in effect, seen in their mind’s eye Christ crucified (1 Cor. 1:23, 1 Cor. 2:2). In a sense, he’s saying that, by their actions, they are turning away from the Cross.

Paul then contrasts the current experience of the Galatians with how they first came to faith in Christ. He does this by asking them some rhetorical questions. How did they receive the Spirit, meaning how did they first become Christians? And from a slightly different perspective, Why did God give the Spirit? Was it because they did something to earn it? Certainly not! Instead, it was because they believed the good news of what Christ had already done for them. Having begun so well, what would make them think that now they had to rely upon their own behavior?