The last church addressed by Jesus was in Laodicea, a wealthy city situated on a major trade road. It was famous for its woolen manufacturing industry, its banks (which held a vast quantity of gold); and a medical school which produced eye salve. 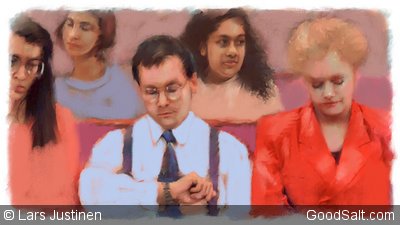 The prosperity of Laodicea filled its citizens with self-sufficiency. Around A.D. 60, when an earthquake destroyed the city, the citizens declined an offer of assistance from Rome, claiming to have all they needed to do the job. Since the city lacked water, it was supplied through an aqueduct that came from the hot springs at Hierapolis. The source was distant from Laodicea, so the water became lukewarm by the time it got there.

Read Revelation 3:14-17 along with Hosea 12:8. How did the self-sufficient spirit of the city pervade the Laodicean Christians?

Jesus did not rebuke the Christians in Laodicea for a serious sin, such as heresy or apostasy. Rather, their problem was complacency leading to spiritual lethargy. Like the water that reached the city, they were neither refreshingly cold nor hot, but lukewarm. They claimed to be rich and in need of nothing; yet, they were poor, naked, and blind to their spiritual condition.

The church in Laodicea symbolizes the spiritual condition of God’s church near the close of this earth’s history, as certain links with end-time portions of Revelation show. One such link, as given in Jesus’ parenthetical warning in Revelation 16:15, refers back to the “white garments” of Christ’s righteousness needed by spiritually naked Laodicea (Rev. 3:18, NKJV). The warning to keep one’s garments and not walk naked appears in the midst of a reference to the spiritual battle of Armageddon. The timing of Jesus’ warning may seem rather strange, at first, because it is no longer possible to receive these garments. After all, probation already will have closed for everyone. But the warning to keep one’s garments appears in connection with the sixth plague and Armageddon because Jesus wants to remind Laodicea to be ready now in advance of that terrible conflict – before it is forever too late. Thus, Revelation 16:15 warns Laodiceans that if they fail to heed Jesus’ counsel and instead choose to remain naked (Rev. 3:17-18), they will be lost, and ashamed, at His coming (see 1 John 2:28-3:3).

Jesus assures the Laodiceans that He loves them. He appeals for them to repent (Rev. 3:19). He concludes His appeal by picturing Himself as the lover in Song of Songs 5:2-6, standing at the door and knocking and pleading to be let in (Rev. 3:20). Everyone who opens the door and lets Him in is promised an intimate dinner with Him and, ultimately, to reign with Him on His throne (Rev. 20:4).