↓
Home→Daily→Thursday: The Mark of the Beast

Revelation chapter 13 indicates that the lamblike beast will have the leading role in the final crisis. This world power will establish a global system in an attempt to control the beliefs of people. This system will mirror medieval Christianity under papal control.

Read Revelation 13:16-17 along with Deuteronomy 6:4-8. What does putting the mark on the right hand or the forehead have to do with the commandments of God? 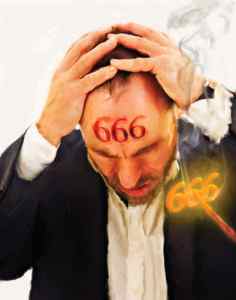 The mark of the beast is not a visible sign of any kind. Its placement on the right hand or on the forehead counterfeits the instruction Moses gave the Israelites to bind God’s law as a sign upon their hands or their foreheads (Deut. 6:8). The right hand has to do with behavior, while the forehead has to do with the mind or mental agreement. Some will choose to receive the mark of the beast to escape the threat of death, while others will be fully committed mentally and spiritually to this apostate system of worship.

The mark of the beast involves the substitution of a human commandment for God’s commandment. The greatest evidence of this fact is the humanly established institution of Sunday (Dan. 7:25) as the day of worship instead of the seventh-day Sabbath, the day mandated in Scripture by our Creator. The attempt to change the sign of God’s authority to another day is an attempt to usurp the role and power of God Himself. “The mark of the beast is the papal sabbath. … When the decree shall go forth enforcing the counterfeit sabbath, and the loud cry of the third angel shall warn men against the worship of the beast and his image, … then those who still continue in transgression will receive the mark of the beast”. – Ellen G. White, Evangelism, pages 234, 235.

Revelation 13:18 (NKJV) says: “Here is wisdom. Let him who has understanding calculate the number of the beast, for it is the number of a man: His number is 666”. Who is this man? Paul describes him as “the man of sin” (2 Thess. 2:3). This designation points to the papal power symbolized by the sea beast, whose blasphemous name on its heads points to the divine title it claims for itself, supposedly standing in the place of the Son of God on earth.