↓
Home » Tuesday: Before the Sanhedrin

Read Acts 7:1-53. What was Stephen saying to his accusers?

The charges raised against Stephen led to his arrest and trial by the Sanhedrin. According to Jewish tradition, the law and the temple services were two of the three pillars upon which the world rests—the last being good works. 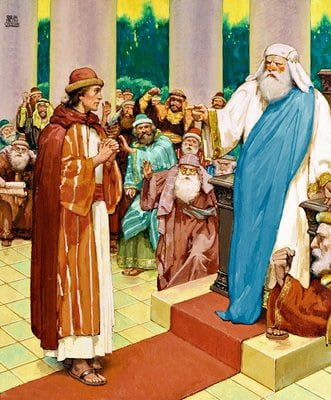 The mere insinuation that the Mosaic ceremonies had become outdated was truly considered an assault on that which was most sacred in Judaism; hence the charge of blasphemy (Acts 6:11).

Stephen’s response is the lengthiest speech in Acts, which by itself is an indication of its significance. Though at first sight it seems nothing more than a tedious recital of Israel’s history, we should understand the speech in connection with the Old Testament covenant and the way the prophets used its structure when they stood up as religious reformers to call Israel back to its requirements. When that happened, they sometimes employed the Hebrew word rî?, whose best translation is probably “covenant lawsuit”, to express the idea of God as taking legal action against His people because of their failure to keep the covenant.

In Micah 6:1-2, for example, rî? occurs three times. Then, following the pattern of the Sinai covenant (Exodus 20-23), Micah reminds the people of God’s mighty acts on their behalf (Micah 6:3-5), the stipulations and violations of the covenant (Micah 6:6-12), and finally the curses for the violations (Micah 6:13-16).

This is probably the background of Stephen’s speech. When asked to explain his actions, he made no effort to refute the charges nor to defend his faith. Instead, he raised his voice in the same way the ancient prophets did when they brought God’s rî? against Israel. His long review of God’s past relationship with Israel was intended to illustrate their ingratitude and disobedience.

Indeed, by Acts 7:51-53 Stephen is no longer the defendant but God’s prophetic attorney presenting God’s covenant lawsuit against these leaders. If their fathers were guilty of slaying the prophets, they were even more so. The change from “our fathers” (Acts 7:11, Acts 7:19, Acts 7:38, Acts 7:44-45) to “your fathers” (Acts 7:51) is significant: Stephen broke his solidarity with his people and took a definite stand for Jesus. The cost would be enormous; yet, his words reveal no fear nor regret.