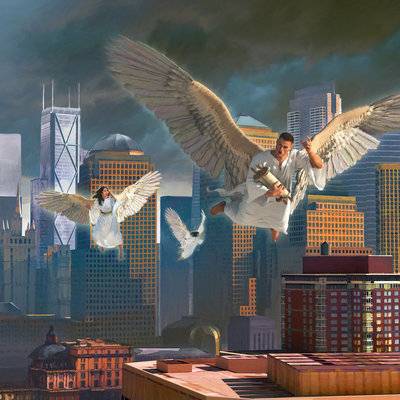 The key issue in the final crisis is emphasized in the second exhortation of the first angel’s message. The call to “worship Him who made heaven and earth, the sea and springs of water” (Rev. 14:7, NKJV) is almost an exact quotation of the fourth commandment of the Decalogue (Exod. 20:11). This fact shows that the call to worship God the Creator is a call to Sabbath observance.

Rest and worship on the seventh day – Saturday – is a special sign of our relationship with God (Exod. 31:13, Ezek. 20:12). The first angel’s message is a call to worship the Creator.

“While the observance of the false sabbath in compliance with the law of the state, contrary to the fourth commandment, will be an avowal of allegiance to a power that is in opposition to God, the keeping of the true Sabbath, in obedience to God’s law, is an evidence of loyalty to the Creator. While one class, by accepting the sign of submission to earthly powers, receive the mark of the beast, the other choosing the token of allegiance to divine authority, receive the seal of God”. – Ellen G. White, The Great Controversy, p. 605.