↓
Home » Wednesday: The Exaltation of Jesus

“Therefore being by the right hand of God exalted, and having received of the Father the promise of the Holy Ghost, he hath shed forth this, which ye now see and hear” (Acts 2:33). 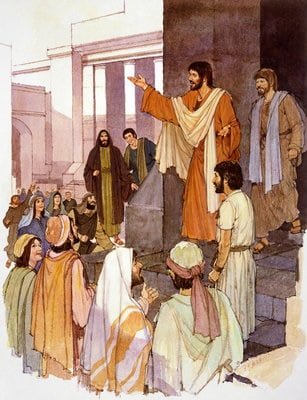 In the third part of the speech, Peter went back to the issue of tongues, which had attracted the people in the first place. Instead of being drunk, which would have been strange at nine o’clock in the morning (Acts 2:15), the believers were speaking in tongues because the Holy Spirit had just been poured out from heaven.

Read Acts 2:33-36. What is the connection between Jesus’ exaltation at the right hand of God and the outpouring of the Spirit?

The right hand of God is a position of authority (Ps. 110:1-3). Peter’s argument, which he based on Scripture, is that it was because Jesus had been elevated to such a position in heaven that He poured out the Spirit upon His followers. The exaltation did not grant Jesus a status He did not have before (John 1:1-3, John 17:5). Instead, it represented the Father’s supreme recognition of His prerogative as Lord and Savior (Acts 2:36).

This event actually brings us to one of the most important themes in Scripture: the cosmic conflict between good and evil. The point is that the Spirit could not fully come if Jesus were not exalted (John 7:39), and Jesus would not be exalted if He had not triumphed on the cross (John 17:4-5). In other words, Jesus’ exaltation was the condition for the coming of the Spirit because it signified God’s approval of Jesus’ accomplishments on the cross, including the defeat of the one who had usurped the rule of this world (John 12:31).

The entrance of sin into the world cast a shadow upon God. Jesus’ death was necessary, not only to redeem human beings but also to vindicate God and expose Satan as a fraud. In Jesus’ ministry, the age of salvation was already at work (Luke 4:18-21). When He cast out demons or forgave sins, He was releasing Satan’s captives. Yet, it was the Cross that would give Him full authority to do that. So, when Christ’s self-sacrifice was authenticated in heaven, Satan had received a decisive blow, and the Spirit was being poured out to prepare a people for the coming of Christ.