↓
Home » Wednesday: Then and Now

Paul’s relationship with the Galatian believers was not always as difficult and frigid as it has now become. In fact, as Paul reflects on the time when he first preached the gospel in Galatia, he speaks in glowing terms of how well they treated him. What happened? 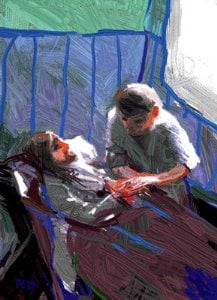 What event seems to have led to Paul’s decision to preach the gospel in Galatia? Gal. 4:13.

Apparently it had not been Paul’s original intention to preach the gospel in Galatia. Some sort of illness, however, overtook him on his journey, forcing him either to stay longer in Galatia than expected or to travel to Galatia for his recovery. Mystery surrounds the exact nature of Paul’s malady. Some have suggested that he contracted malaria; others (on the basis of Paul’s reference to the Galatians’ willingness to pluck out their eyes and give them to him) suggest that it was perhaps an eye disease. His illness may also have been connected to the “thorn in the flesh” he mentions in 2 Corinthians 12:7-9.

Whatever Paul was suffering from, he does tell us it was so unpleasant that it became a trial to the Galatians. In a world where illness was often seen as a sign of divine displeasure (John 9:1-2; Luke 13:1-4), Paul’s illness easily could have provided the Galatians with an excuse to reject both him and his message. But they welcomed Paul wholeheartedly. Why? Because their hearts had been warmed by the preaching of the Cross (Gal. 3:1) and the conviction of the Holy Spirit. What reason could they give now for their change of attitude?

Whatever Paul’s illness was, it certainly was serious, and it easily could have provided him with an excuse either to blame God for his problems or to simply give up on preaching the gospel. Paul did neither. Instead of letting his situation get the best of him, Paul used it as an opportunity to rely more fully on God’s grace. “Time and again God has used the adversities of life — sickness, persecution, poverty, even natural disasters and inexplicable tragedies — as occasions to display [H]is mercy and grace and as a means to advance the gospel.” — Timothy George, Galatians, pp. 323, 324.