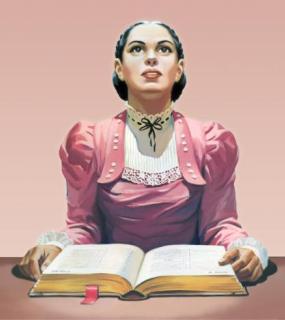 Ellen White gets it! She understands the twenty-first-century heart-cry to know and experience God, to do something meaningful and enduring in life, and to grapple with issues of poverty, alienation, health, education, diversity, inclusiveness, integrity and eternity.

The principles she espoused transcend time and are more pertinent and applicable than ever.

Yes, there are myriad books today on health, spirituality, life balance and eschatology. But the reason I believe Ellen White cuts through the nebulous maze of conflicting theories and nails it every time is that she is inspired by God Himself.

Why do I believe this? Well, Jesus said beware of false prophets. (Matt 24:24) Seems to me He would have just said, Beware of prophets, period, if there were to be no subsequent genuine prophets bearing messages from heaven. Joel speaks of prophetic messengers in the end time and prophets are mentioned in every list of the gifts of the Spirit ( Joel 2, Eph. 4, I Cor. 12, Romans 12).

OK, so how do I know if one who claims possession of the prophetic gift didn’t have too much ice-cream and pickles the night before “the vision” or how do I know they aren’t on some grand power trip? Again, the Bible gives me some help in testing the authenticity of the prophetic claim. Do they speak according to the true prophets who went before, that is, the biblical prophets? (Is 8:20) Does the trend of their life exemplify Christian values? (Matt. 7:20) Do they promote Jesus as God (I John–just check out the whole little book to get a bigger picture)

Most Adventists that I know think Ellen White is inspired . . . to write Steps to Christ and The Desire of Ages. Nice pastoral stuff. Not too much in those books that cut across our favorite theories or vices. But some Adventists find her uninspired when it comes to Messages to Young People,  Counsels on Diets and Foods, or The Great Controversy. In those books, according to some, she’s merely expressing her own opinion based on her 19th century milieu.

One of our designers gave Ellen White a cosmetic make-over (see the picture above). That’s kind of fun, and probably doesn’t do any harm (unless you’re totally humorless, in which case you might be wielding EGW as a lethal weapon anyway.) But it seems to me that when we start a make-over on which messages of Ellen White are inspired and which are not, we might be treading on some potentially deadly quicksand.

After all, another important test of a true prophet is that they’ll let us know what we’re doing wrong, even if it makes him or her an unpopular prophet. (Jeremiah 23:16-17, 21-22.) Paul says the purpose of prophecy is to edify, exhort, and comfort. (I Cor. 14:3) We like the comfort part. Bring on the love, the grace, the Good Shepherd images! Edify? Well, sometimes. Depends mostly if the counsel in question matches our preconceived opinions. Exhort? Not so much. We just don’t like the prophetic voice to challenge our favorite food, entertainment, or theories about the anti-Christ or earth origins.

There’s nothing new about that sort of reaction to the prophetic voice. The ancient Jews loved their prophets–as long as those prophets said what kings and people wanted them to say. If not, well, look what happened to Jeremiah (thrown in a cess pool), Isaiah (tradition says he was stuck in a hollow log and sawed in half), Zechariah (slain in the temple court while trying to escape his murderous congregation).

We’re much too sophisticated to literally stone the prophets. (And anyway, it’s logistically difficult to stone a person who is already dead and buried.) But our pseudo-sophistication causes us to draw those heavy guns of higher criticism and compete to see who can apply the most reductionism to Ellen White’s writings.

In the meantime, the stones are crying out. In the May 30, 2005 edition of the electronic newsletter, Update, the Barna Group reported that [non-SDA] pastors under the age of forty listed Ellen White as one of their most significant influences. Non-SDA author Robert Cohen has recently written two books lauding the philosophical and lifestyle principles of Ellen White. In Food for Thought, Cohen compares citations from Ellen White with hundreds of philosophers, ancient church fathers and mothers, and other respected elders. In the introduction, Cohen writes, “Together, they shimmer like a powerful beacon of truth, with Mrs. White’s work as the centerpiece, outshining the brightest of stars.”

At The Ellen White Project, a symposium on the contributions of EGW that convened recently in Portland, Maine, Adventists in attendance were surprised at the vehemence with which some non-SDA historians basically said to the Adventists, Get over your issues with plagiarism! This woman is writing from 19th century literary expectations, not 21st century expectations. Her contributions are astounding and worthy of much more study.

And then there’s us.

Sometimes we seem pitifully like the vineyard leasers of Mark 12. Sent messenger after messenger, those vine dressers beat them, threw stones at them, even murdered a few. Hoping they would respect His Son, the vineyard owner sent His Best. Were they too proud? Too power hungry? Too bent on defending their own positions? Too stubborn? Anyway, they killed The Heir.

Prophecy, according to Ephesians 4, is a gift. Imagine that your significant other writes a journal of his/her hopes and dreams for your future and expectations for your life together, love saturating every line. Would your lover have to force you to take off the wrapping? No! In all likelihood, you would be eager to see the gift, to look into his or her heart through the pages of the journal, learning more about your shared love.

If we don’t open Ellen White’s books, God doesn’t hate us! He still loves us, he still sends the Spirit to encourage our spiritual growth. But surely God grieves when we reject an opportunity to look into His heart, to see the longing He has to see us whole and happy–body, mind and spirit–and to better understand His plans to bring us home.