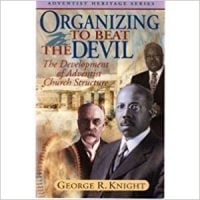 With the 2017 Autumn Council, many folks had reason to review our organizational history to understand just what organization and authority is supposed to look like in our church. A very readable and fairly brief book on the subject was written by Adventist historian George Knight: Organizing to Beat the Devil: The Development of Adventist Church Structure, of the Adventist heritage series. (Available only in Paperback.) 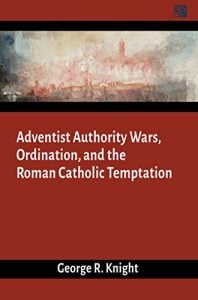 in early September 2017. (This is available in paperback as well as Kindle versions. So if you got here from Canada, the US, or Great Britain, you can download this immediately. Many other countries can also download directly from the US Store through the same link.)

In Adventist Authority wars, Ordination and the Roman Catholic Temptation Knight deals with a good bit of Adventist history in his very readable style. He proposes that other current contentious issues in our church are but symptoms and that the real issue is the push towards a hierarchical form of governance, with each level of governance having authority over the “lower” level, much as is practiced by the Roman Catholic Church.

By contrast, Jesus said, “It shall not be so among you.” (Matthew 20:25-27) He taught us that we are to serve one another, not rule over each other. Consequently the organization of the Adventist church was originally designed to be non-hierarchical, with churches voluntarily associating in conferences, which voluntarily associated in unions, with the General Conference facilitating this association. The authority was to rest in the local church body, with the vote of members subject to the Holy Spirit expressing the mind of the Spirit. In other words, our organization was designed to the Spirit-led.

However, it seems that a lack of faith has repeatedly led to a giving in to “the Roman Catholic temptation,” with a resultant consolidation of power at the top. Ellen White strongly warned against this. But leaders, fearing the inroads of false teachings saw the solution as more control and thus created policies after policies to grasp this control. (Our GC Policies Manual now has over 700 pages.) But Ellen White wrote this:
“The church may pass resolution upon resolution to put down disagreement of opinions, but we cannot force the mind and will, and thus root out disagreement.” Ellen G. White, (Manuscript 24, 1892)

Unity will come only through the Holy Spirit. And He will cause us to regard one another as equals. As Ellen White also said, “The secret of unity is found in the equality of believers in Christ.

The reason for all division, discord, and difference is found in separation from Christ.” (1 Selected Messages, p. 259)

Earlier in the year 2017, retired Adventist Review editor William G. Johnsson had published Where Are We Headed?: Adventism after San Antonio, a very personal reaction to the proceedings at San Antonio. He shared concerns about the direction in which the Seventh-day Adventist Church seemed to be headed after the 2015 San Antonio General Conference session. It was not so much the issue of women’s ordination that concerned him, but where the church seemed to be headed. While it should be of interest to Adventists everywhere, it will be of special interest to readers of the Review.

Did Ellen White change her concept of the Godhead or her understanding of Christ’s nature during her ministry as some have suggested?

In Ellen White and the Trinity, Pastor Jan Voerman addresses this topic by interpreting Ellen White’s statements on the subject of the Godhead in their chronological and literary context. (Available in Kindle format.) The book appears to be addressed particularly to Seventh-day Adventists who have a strong belief in the inspiration of Ellen White yet do not accept trinitarian teachings on the basis that “the pioneers” didn’t teach it. This may be a strength in certain situations, but to me it seemed like an overall weakness, because it could just as well lead people to conclude that Ellen White got it wrong. In other words, her word was given too much weight, when the doctrine can well be demonstrated from Scripture. And Woodrow Whidden does demonstrate the doctrine from Scripture Trinity: Understanding God’s Love, His Plan of Salvation, and Christian Relationships.

I downloaded Voerman’s book because it was easily accessible and I was interested in what the author had to say. However, if you have access to Whidden’s book (below), which we have in hardback, you’ll find that he treats the contributions of Ellen White quite extensively. 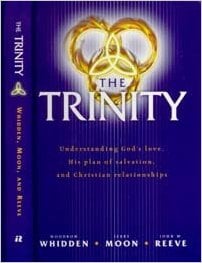 October, 2002) Whidden approaches the topic in scholarly, thorough, yet clear fashion. If you don’t mind stretching your mind a little, you will find this book worthwhile reading if you’ve been hearing questions about the Trinity or have your own question.

I believe that the current confusion has come about because some of our early Adventist pioneers struggled with the teaching of the trinity because they came from anti-Trinitarian churches who perceived the teaching as an unBiblical church tradition. For quite some time, based on their church background, some actually held Arian beliefs, meaning that they believed that Jesus had a beginning and was a lesser god. However, as our pioneers studied and prayed together, they eventually rejected Arianism and accepted a tri-une understanding of God, recognizing the eternal nature of Jesus in their core beliefs. This was helped along significantly by some strong statements Ellen White wrote in connection with her writing the Desire of Ages.  The doctrine of the Trinity eventually became the Fundamental Belief  #2 of the Seventh-day Adventist church:

This page was prepared by Inge Anderson