The historical Adventist method of Bible study, also known as hermeneutics, is detailed in “Methods of Bible Study,” an official document approved at the 1986 Annual Council. This method focuses on reading the Bible literally, except when context indicates that a selection is to be read figuratively. It recognized the divine-human nature of the biblical text insofar as God inspired human being with thoughts which they wrote down in their own words. Thus, it recognizes that specific words are not inspired, but the thoughts are. In recognition of the divine source of the thoughts of the Bible, this method recognizes that the Holy Spirit will guide the earnest seeker for truth when such a seeker asks for divine insight. (Compare John 16:13; 1 Cor. 2:14) 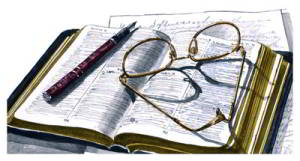 This method includes a strong emphasis on allowing the Bible to be its own interpreter, comparing Scripture with Scripture. It also includes the necessity of considering the context in which a passage is found. Thus an examination of  the literary, historical and cultural context of a passage is important in discerning its meaning for us today, particularly on potentially divisive subjects. While this method recognizes that God met man in the context of human culture, it also recognizes that the essential truths of the Bible transcend its cultural and functions as the Word of God for all cultures.

As practiced in much of contemporary Christianity, this method gives higher priority to science, secular history, archaeology and culture than does the Adventist Historical method. The findings of science are deemed as fact and applied to the text of Scripture to determine what the Bible means. In effect, this means if there is an apparent difference between the findings of the modern sciences and the text of Scripture, science wins. For instance, this method sees the first chapters of Genesis as an instructive myth, rather than historical fact, whereas the Adventist Historical method regards these chapters as historical fact which is more reliable than the paradigms of modern science.

While the official Adventist church does not accept the hermeneutics of the historical-critical method as described here, many of its educated members do accept this method due to the perception of the overwhelming evidence of science in its favor. To understand that the evidence of science is not as overwhelming as presented in popularly understood, please see our Creation and Science resource page.

The allegorical method is a method of assigning “hidden meanings” to passages of Scripture, limited only by individual imagination. This method was used to arrive at the doctrines of the Roman Catholic Church which are not supported by a more natural interpretation. Protestant Reformers like Martin Luther and John Calvin rejected this method because it tended to ignore the plain sense of passages and were impossible to critique in any fair manner. (How exactly was one to know if such allegories were true or not?)

The allegorical method of the interpretation has a long history among the Greeks, pre-dating Christianity, and it was adopted by Jewish scholars before Christ. It was apparently first used among Christians by the “church father,” Origen or Origen Adamantius (184/185 – 253/254). It allowed him to find support in Scripture for some ideas that were not supported by a more natural meaning.

While Adventists have generally rejected the allegorical method, it tends to creep in when certain individuals believe they have discovered “new light” in Revelation or even in the Old Testament sanctuary. For instance, items in the sanctuary are assumed to have hidden meanings that are nowhere referenced either in Scripture or the writings of Ellen White. The same is done in Revelation, with no way of determining whether the interpretation is correct, as contrasted with the historicist method which contains checks and balances in reference to biblical typology and actual dates in history.

While it may be reasonable to draw parallels, as in “This reminds us of …,” we should beware of persons who declare “This means that …” without any support in Scripture.

We believe that the only proper use of allegory in interpreting Scripture is when the texts itself instructs us to do such, as in Galatians 4:24.

People who advocate this method say that Ellen White advocated this method. She did not actually use the words “plain reading,” but she did write this:

A great work can be done by presenting to the people the Bible just as it reads. Carry the Word of God to every man’s door, urge its plain statements upon every man’s conscience, repeat to all the Saviour’s command, “Search the Scriptures.” Admonish them to take the Bible as it is, to implore the divine enlightenment, and then, when the light shines, to gladly accept each precious ray, and fearlessly abide the consequences. (Evangelism, p. 434)

This is used to advocate a very literalistic reading of Scripture. However, Ellen White actually used the “Historical Adventist Method” of interpretation. This “plain reading” method is a fairly recent phenomenon used by Seventh-day Adventists to bolster their point of view. Perhaps we should say that the designation “plain reading” as a hermeneutical method is new. But the way Scripture is used in this “method” is very old.

We ran into this “plain reading” just recently in a church business meeting in which a very conservative church had a conversation about women elders – who are found in a great many of our western churches. The immediate reaction to this by one woman was to quote 1 Timothy 3:1-7:

2 A bishop then must be blameless, the husband of one wife, vigilant, sober, of good behaviour, given to hospitality, apt to teach;
3 Not given to wine, no striker, not greedy of filthy lucre; but patient, not a brawler, not covetous;
4 One that ruleth well his own house, having his children in subjection with all gravity;
5 (For if a man know not how to rule his own house, how shall he take care of the church of God?)
6 Not a novice, lest being lifted up with pride he fall into the condemnation of the devil.
7 Moreover he must have a good report of them which are without; lest he fall into reproach and the snare of the devil.

This was presented as irrefutable evidence that there could not be female elders. After all, women can’t have wives. End of discussion. Or so this person apparently hoped.

But let’s just use a little common sense to look at this text again. Does this sort of literal reading only exclude women?

In real life, the woman who brought up this text was unimpressed by any of this “plain reading.” But she was very sure that an elder could not be a woman, even though the text doesn’t explicitly say that.

Our pioneers had to deal with this text and the one about women being “silent in church” very early in our history, and they did so admirably. That the question should arise again is puzzling – especially since this kind of biblical interpreting comes from a totally different corner of Christianity.

Of course, there are many more examples. For instance, the Ten Commandments explicitly say that a man shall not covet his neighbor’s wife. Pretty well everyone agrees that this commandment applies to women as well and forbids covering another woman’s husband. But a “plain reading” does not really permit this. However, it is a common-sense interpretation that “plain readers” deny when it comes to issues they hold dear.

So the bottom line is that “plain reading” is not a valid hermeneutic. It is simply a method to interpret the Bible literally where is suits one’s purpose and figuratively where it doesn’t. That’s because no one is willing to become a laughing stock by interpreting everything literally, although there was a small group in early Adventism that took literally Christ’s admonition to “become as little children.” So while this group lasted, they crawled everywhere they went.

It is beyond the scope of this essay to deal with everything Paul has to say about women. This was merely meant to illustrate. But if you are interested in what Paul really said about women, we recommend the book What Paul Really Said About Women, by John T. Bristow. The author approaches the subject through the Historical Method Adventists generally use. The book is brief but thorough. (Good hermeneutics don’t result in complicated explanations.)

“How to Listen to the Messenger” (section on hermeneutics in the book Messenger of the Lord by Herbert E. Douglass, 1998. You can download the whole book for free, read it online, or buy it in Kindle or paper format on Amazon.com)

“Editorial: Introducing this issue,” Willmore D. Eva, Ministry Magazine, March 1999, an issue devoted to the subject of inspiration and the Bible.

“the case for a balanced hermeneutic,” by Robert M. Johnston, Ministry Magazine, March 1999. (Johnston describes the incarnationalist and inerrantist approach and pleads for balance.)

“Learning from Ellen White’s Perception and Use of Scripture: Toward an Adventist Hermeneutic for the Twenty-first Century,” by Arthur Patrick, Research Fellow, Avondale College, 2003. Quite readable scholarly article.