1. Coming from all points. At our church’s General Conference Session starting July 2, will the stream of people coming from all points of the world resemble in any way the scene described in Luke 13:20? How does it make you feel to realize that we are part of a world-wide celebration of the glory of God just as were the early leaders of the Christian church? Is your heart ready for the Kingdom of God to come upon us? 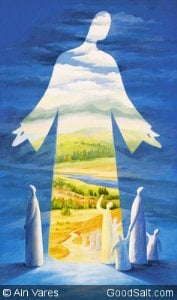 “I Am the Way” Image © Ain Vares from GoodSalt.com

2. The reality of the kingdom of God. Is there a real kingdom of God now? Where is it? What is God’s kingdom going to be like after Jesus comes? How will it be different from the way it is now? Why doesn’t Satan give up? Doesn’t he know he’s been defeated? Or does he cling to the chance that he can cause every person, one by one, to pursue his selfish ways? Right now, today, as you contemplate what is going on in the world around you, who would you say is winning the war? How can you and I participate in winning the final victory over sin?

4. Has the kingdom of heaven already arrived? What do you see as Jesus’ meaning when Luke quotes Him saying that the “kingdom of heaven is within you?” Does that mean “in your midst”? “in your heart”? “in your imagination”? What changes all of this at the Second Coming? When all sin and all reminders of such, have come to a final end, will the kingdom of heaven take on a new and different presence? Are you eagerly anticipating the day when you can enter the gates of that kingdom for an eternity of life with Jesus?

6. Witnesses. What have we end-time Christians witnessed that we must now share with others? Aren’t you glad you know everything about end-time events so you can let people know what’s happening? You don’t think you know that much? What do you need to know to be an effective witness to the Word of God and His plan for the future? Are you willing for God to show you, lead you, and help you understand enough to be a witness of God’s great love to all of us?

Note: I will be taking a short break/vacation for the next several weeks. I hope to be back in mid-July or early August at the latest.