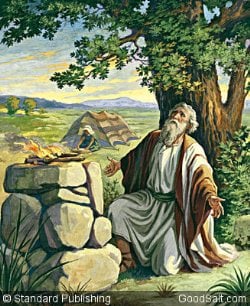 What covenant promises did God make to Abram in Genesis 12:1–5? What was Abram’s response? 1

God’s initial promises to Abram make up one of the more powerful passages in the Old Testament. These verses all are about God’s grace. It is God, not Abram, who makes the promises. Abram had done nothing to earn or merit God’s favor, neither is there any indication that suggests that God and Abram had somehow worked together to come up with this agreement. God does all the promising. Abram, in contrast, is called to have faith in the surety of God’s promise, not some flimsy so-called “faith” but a faith that is manifested by his leaving his extended family (at the age of seventy-five!) and heading to the land God promised.

“With the ‘blessing’ pronounced on Abraham and through him on all human beings, the Creator renewed His redemptive purpose. He had ‘blessed’ Adam and Eve in Paradise (Gen. 1:28, 5:2) and then ‘blessed Noah and his sons’ after the flood (9:1). This way God clarified His earlier promise of a Redeemer who will redeem humanity, destroy evil, and restore Paradise (Gen. 3:15). God confirmed His promise to bless ‘all peoples’ in His universal outreach.”—Hans K. LaRondelle, Our Creator Redeemer, pp. 22, 23.

After ten years of waiting for the promised son to be born, what questions did Abram have about God’s promise? Gen. 15:1–6.

It often is easy to glorify Abram as the man of faith who never had any questions or doubts. Scripture, however, paints a different picture. Abram believed, but he also had questions along the way. His faith was a growing faith. Like the father in Mark 9:24, Abram basically said to God in Genesis 15:8, “I believe, help my unbelief.” In response, God graciously assured Abram of the certainty of His promise by formally entering into a covenant with him (Gen. 15:7–18). What makes this passage so surprising is not the fact that God enters a covenant with Abraham but the extent to which God was willing to condescend to do so. Unlike other rulers in the ancient Near East, who balked at the idea of making binding promises with their servants, God not only gave His word, but, by symbolically passing through the pieces of slaughtered animals, He staked His very life on it. Of course, Jesus ultimately give His life on Calvary to make His promise a reality.

What are some areas now where you have to reach out by faith and believe in what seems impossible? How can you learn to keep holding on, no matter what?