Since this interesting question came up in our comments, I did a little research. And it leads me to conclude that the contemporaries of Christ were far more literate than we like to give them credit for.

Now I’m not an expert in history or biblical languages, nor a mathematician, but I’m thinking that we can draw a few deductions from the biblical story and other sources. The Bible demonstrates that Christ had an intimate knowledge of the Scriptures as early as His first visit to the temple when He astonished the teachers of the temple school in Jerusalem with His insightful answers. (Luke 2:47) He was only twelve at the time. Since he did not attend the rabbinical schools, He must have gained His familiarity with the Word of God by other means, and the following passage from Education, provides a little insight: 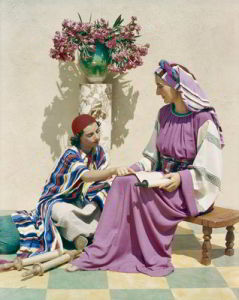 In childhood, youth, and manhood, Jesus studied the Scriptures. As a little child He was daily at His mother’s knee taught from the scrolls of the prophets. In His youth the early morning and the evening twilight often found Him alone on the mountainside or among the trees of the forest, spending a quiet hour in prayer and the study of God’s word. During His ministry His intimate acquaintance with the Scriptures testifies to His diligence in their study. And since He gained knowledge as we may gain it, His wonderful power, both mental and spiritual, is a testimony to the value of the Bible as a means of education. (Education, p. 185) 1

Many consider it unlikely that a humble carpenter’s family would have owned their own full set of scrolls containing all of the Scriptures of the time. (The Torah, the Prophets, and the Writings.) So let’s do a little extrapolation.

The Cost of Scriptures in the Time of Jesus

Since the Scriptures were more expensive then than they are now, they were  more highly treasured and handed down through generations. Furthermore, the family structure included several generations, including aunts, uncles, and siblings, who could share resources. Since Joseph appears to have been much older than Mary, it is not unlikely that the extended family of Mary and Joseph possessed half a set of scrolls, or more, by the time Jesus was born. Mary and Joseph would have had to save and prioritize to acquire a full set if the family did not already possess one.

The most optimistic source mentioned that it would likely take a scribe about three days to copy out the scroll of Isaiah, which is a rather long book. An interesting quote from that document:

These lines of evidence and others could be adduced: all lead to the conclusion that there was much more writing in Palestine during the Gospel period than has been commonly allowed. When Luke says that he sought out the most reliable sources while compiling his Gospel, we may suppose that he could read notes made by eyewitnesses at the time Jesus spoke. (Alan Millard, “Reading and Writing In the Time of Jesus,” accessed January 20, 2014)2

If we assume it took about twice as long as suggested by Millard (since the estimate seems rather optimistic) it would take about 90 days to hand-copy all of the Old Testament in Greek (from the Septuagint), keeping in mind that the work days were 12 hours long, rather than the current 8 hours. (See Matt 20:1-12) 3 As I understand it, the sacred writings were transcribed in a communal setting, with one reader and many scribes. While that isn’t exactly mass production, it would result in many copies available to the faithful. 4

Let us assume that the price of materials for the scrolls is equal to the price of labor, as is often the case today (except that the material cost of books is much less today). That would make the cost of a whole set of scrolls equivalent to 180 days of labor. If Mary and Joseph owned only half a set of scrolls, they would need to save enough money to buy another half a set of scrolls (costing at least 90 days of labor) in the first 10 years of their son’s life. 5

Both Mary and Joseph knew who this Child was. They understood that He was entrusted to them to raise “in the nurture and admonition of the Lord.” (Eph 6:4) Thus I believe it is quite realistic to assume that they prioritized the possession of a full set of Bible scrolls. And the boy Jesus had full access to them and studied them for Himself, as well as at His mother’s knees.

And that makes me wonder: What priority do we place on the Scriptures today? The Bible is widely available, not only in paper print versions, on the internet, and also in wonderfully helpful electronic Bible apps. Do we spend enough time in the Word to be excited by it? Or do the popular media of our day – electronic or hard-copy – crowd out the Word of God from our lives?

I remember the powerful ministry of H.M.S. Richards, Sr. Most people didn’t know it, but for many years before he quit actively preaching, his eye sight was too poor to read the Bible – at least in the pulpit. My husband recalls sitting behind him while he was “reading” passages from the Bible, held upside down and open to the wrong pages. Elder Richards was quoting entirely from memory – one passage after another! That should not be surprising, seeing he spent many years of his life, reading the New Testament through once each month, and reading the whole Bible through once each year.

How well would we know the Bible if we followed His example?

Do we make an effort to ensure that the Bible is available and interesting to our children? (This would probably mean that parents would ensure that children’s lives were kept uncluttered and free of the diversions of electronic games, etc., while making a readable Bible version accessible to their children and spending time with them, reading and discussing the content.)

A Hebrew child of 12 years old was considered an adult and expected to know the sacred writings and take responsibility for living according to them. [See William Earnhardt’s “How Youth Groups Can Defeat Their Purpose.”] What do we expect of our children? Children, like adults, tend to live up to what is expected of them. When little is expected of them, they will comply and remain immature. What are we teaching them at home and in Sabbath School? 6

We are fortunate that the Bible is available in versions easily accessible to children. My favorite version for children is the Good News version which was originally called “Today’s English Version,” or TEV, for short. Since it was translated to be accessible to those for whom English is a second language, it has a limited vocabularly suitable for children. (Most “children’s Bibles, by contrast, are simply regular translations, often difficult for children, with extra illustrations.) While the GNB is not the best study Bible for adults, it is a delightful version for children. providing you get the version with illustrations by Annie Vallotton. (More on Annie Vallotton’s illustrations.) 7

The Bible is highly interesting, if the soil is not pre-occupied with Satan’s diversions. Are we prioritizing familiarity with the Word as did the parents of Jesus?

And if Jesus needed to study the Scriptures, how much more necessary that is for us!