There is a phenomenon that is sometimes difficult to explain but can best be described as “circular influence.” Concerning harmony and involvement, circular influence goes like this: by getting people involved you promote harmony, which in turn encourages people to become involved, which in turn promotes harmony. You can see the circular influence principle at work. It is clearly demonstrated in the old saying that those who are pulling on the oars don’t have time to rock the boat. 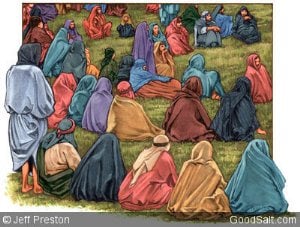 There were some key decisions made in the development of the early church’s organization that could have caused major conflict, but the personal preferences of the believers were submitted to what was best for the task that their Lord had given them.

Consider the important appointment process recorded in Acts 1:15–26. Although we don’t cast lots today, what key points were they looking for here, and what principles can we take from this example for the work of ministry today?

Of course, whenever human beings are working together, there is the potential for conflict. We would be right in assuming that the evil one is working to undermine the effectiveness of believers. It is only fair, then, that we briefly review an incident in the evangelistic ministry of the early church where the conflict was real.

Examine Acts 15:36–40. What caused the difference of opinion between Paul and Barnabas? What was the result of their disagreement, and what can we learn from it?

There was no argument regarding what missionary work should be done, and, rather than let personal differences overshadow the evangelistic task, they sent out two witnessing groups. Although Paul and John did work profitably together again (see 2 Tim. 4:11), their differences at this time were not allowed to interfere with their mission.

Think of someone with whom you might be struggling now in church? How much humility, death to self, and a willingness to forgive and to turn the other cheek will you need in order to bring reconciliation?