I have been known to be kind of a klutz … not altogether undeservedly, I’m afraid. Well, this week I cut my finger while fixing lunch. The sad part thing was that I knew it was going to happen, but could not seem to make my hand move out of the way of the knife. Thankfully, the cut didn’t need anything more than a bandage, but it got me thinking about inevitability. 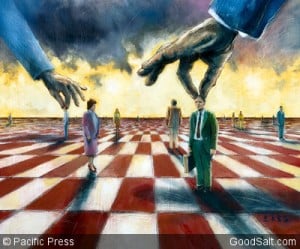 Then I read a story told by contemporary Christian singer, songwriter and author, Carolyn Arends that perfectly summed up what I was thinking.

Arends relates a memory from her childhood of listening to visiting missionaries sharing their experiences in the mission field. In this particular story, the missionary couple told a story about a snake.

“One day, they told us, an enormous snake—much longer than a man—slithered its way right through their front door and into the kitchen of their simple home. Terrified, they ran outside and searched frantically for a local who might know what to do. A machete-wielding neighbor came to the rescue, calmly marching into their house and decapitating the snake with one clean chop.

“The neighbor reemerged triumphant and assured the missionaries that the reptile had been defeated. But there was a catch, he warned: It was going to take a while for the snake to realize it was dead.

“A snake’s neurology and blood flow are such that it can take considerable time for it to stop moving even after decapitation. For the next several hours, the missionaries were forced to wait outside while the snake thrashed about, smashing furniture and flailing against walls and windows, wreaking havoc until its body finally understood that it no longer had a head.

“Sweating in the heat, they had felt frustrated and a little sickened but also grateful that the snake’s rampage wouldn’t last forever. And at some point in their waiting, they told us, they had a mutual epiphany.

“I leaned in with the rest of the congregation, queasy and fascinated. ‘Do you see it?’ asked the husband. ‘Satan is a lot like that big old snake. He’s already been defeated. He just doesn’t know it yet. In the meantime, he’s going to do some damage. But never forget that he’s a goner.’”1

Does that story remind of you anything? It does me. “And I will put enmity between you and the woman, and between your seed and her Seed; He shall bruise your head, and you shall bruise His heel.” Genesis 3:15

Contrary to Arends’ story, I believe that Satan knows (and has known since Jesus died and rose again) that he’s lost but is determined to wreak as much havoc as he possibly can.

“A battle unseen by human eyes is being waged. The army of the Lord is on the ground, seeking to save souls. Satan and his host are also at work, trying in every possible way to deceive and destroy. . . . Day by day the battle goes on. If our eyes could be opened to see the good and evil agencies at work, there would be no trifling, no vanity, no jesting or joking. If all would put on the whole armor of God and fight manfully the battles of the Lord, victories would be gained that would cause the kingdom of darkness to tremble.” (Ellen G. White, Testimonies for the Church, Vol. 6, p. 41)

My brother and I played all kinds of board games as kids. In general, he is the better player, so there would come a point in almost every game when I knew that I was going to lose. Sometimes when I saw that loss coming, I would just quit, but other times I would hang on and try to cause as much damage as I could before the inevitable happened. Chess was probably the most frustrating for both of us. I really stunk, but I was pretty much his only option for a partner if he wanted to play. I can remember many times when I’d be down to just a couple of pieces. I would only be able to move back and forth between two or three spaces. I knew it was just a matter of time until my brother would close in and call, “Check Mate!” but I wouldn’t quit until he actually said those words
.
It’s called being a sore loser and anybody who might have been watching would have known which of us was the better player and which of us was being a pouty little girl.

The controversy between Jesus and Satan isn’t about who wins or loses any more because ever since Jesus died and rose again, we all know Who’s already won. What we, and all the beings in the universe are observing now is a demonstration of the character of God – the God who allows each individual the freedom to accept or reject His salvation, who is eternally just and loving.

“But in spite of all the efforts of the enemy to make of none effect the word of God, he who has a heart to search for truth will find it; for it lies open before him, revealed in the word of God, as the secrets of nature are open to him who studies her laws. God’s word is the revelation of all truth; and in laboring for souls, the minister should seek to unveil the truth in such a way that it will make the right impression upon the heart, that the sinner may renounce his allegiance to Satan, and turn to Christ. Jesus is ready to accept the soul who turns to him, pleading the merits of the blood of Christ. He will receive, pardon, purify, and make him whole. But before this point is reached, before the soul surrenders to Christ, there is a time when the will is vacillating, when the soul is under conviction, and pressed by doubt, and it is then that a strong personal effort should be made. The minister should come close to the trembling one, and point him to Calvary, lifting up a crucified and risen Saviour as the sinner’s only hope. There are many whose hearts are as hard as the beaten highway, and apparently it is a useless effort to present the truth to them; but while logic may fail to move, and argument be worthless to convince, let the laborer for Christ come close to such in Christlike sympathy and compassion, and it may be that the love of Christ will subdue and melt the soul into tenderness and contrition. ‘The world by wisdom knew not God.’ Let the wayward and hard-hearted be led to the feet of Jesus; here they may learn precious lessons of love of their Creator and Redeemer, and hope will spring up. ‘For God so loved the world, that he gave his only begotten Son, that whosoever believeth on him should not perish, but have everlasting life.’” (E.G. White, Review and Herald, May 31, 1892)

Which side will you be on when the final battle is fought?

We know who wins – Jesus has already said the final words: “Check Mate!”