If it had not happened, could we imagine a world in which God became a Man and lived among us? Although He could have come as a powerful and wealthy King, He chose to come as a newborn powerless and poor Baby. He lived like those around Him. He obeyed His parents and His government. He even allowed them to put Him to death.

We don’t know much about Jesus’ growing-up years … probably because it was much like everybody else’s who grew up at the same time. There was nothing that would make His childhood look different from the other children in Nazareth. He was a Jewish boy, from a Jewish family, in a Jewish village. 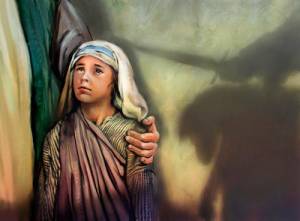 Then something startling happened. When He was twelve, in Jerusalem for His first Passover, He realized who He was. Think for a minute about how that moment of revelation must felt for Jesus. Can you imagine being twelve and finding out that you were the Creator of the planet that you were standing on and everything on it?

Even more mind-boggling though, is that after coming to that realization, Jesus went home with His earthly parents and continued to live, work beside, and obey them for the next 18 years. Our sinful, earthly minds rebel at the thought of being subject to anyone, especially someone we perceive as being somehow less important than we are. Yet Jesus knew He was God, and still obeyed His parents and lived as their Son.

From the time when Jesus and God the Father made the plan to redeem humanity, Jesus had been obedient to the laws that governed Him. Some people like to paint Jesus as a rebel, but if we look closely at His life, we realize that He never broke a rule He didn’t have to. In every way He lived the life of a devout Jewish baby, child, and man. His parents had Him circumcised just like every other Jewish boy. He didn’t eat any unclean meat. He kept all the Jewish feasts that pointed to Him as the Redeemer. He kept the Sabbath that pointed to Him as the Creator. He kept the Ten Commandments that He had written with His own finger.

In the stories of the mythological gods, all of them tried to “fly under the radar.” Most of them didn’t even attempt to live by the same rules that humans were expected to follow. Most of the mythological gods were immoral, jealous, and unprincipled beings, according to the stories written about them. They used whatever power they had to draw attention to themselves and to get what they wanted, no matter what it cost anyone else.

Jesus was different. He allowed Himself to be beaten and killed to save each one of us, even though He could have destroyed those who were mistreating Him.
Do you think you would be able to do what Jesus did, even on a smaller scale? Here’s the story of someone who did. His name was Witold Pilecki, a captain in the Polish army and a committed Christian. In September 1940, Pilecki did the unthinkable – he sneaked into Auschwitz!

Why would anybody sneak in to a Nazi death camp? Well, Pilecki was sure that very bad things were happening in that place and he wanted to get proof of what was going on. He could only get that information from the inside. So Pilecki came up with the plan. His superiors approved it and made sure he had a false ID card with a Jewish name. Then Pilecki went out and got himself arrested by the Nazis. He was sent to Auschwitz and tattooed as inmate number 4859.

Now, it wasn’t like Pilecki had nothing to lose, he had a wife and two kids. He said, “I bade farewell to everything I had known on this earth.”

Once inside the death camp, he didn’t go around telling people that he wasn’t Jewish and that he should be treated differently.

He “became just like any other prisoner—despised, beaten, and threatened with death. From inside the camp he wrote, ‘The game I was now playing at Auschwitz was dangerous…. In fact, I had gone far beyond what people in the real world would consider dangerous.’
“But beginning in 1941, prisoner number 4859 started working on his dangerous mission. He organized the inmates into resistance units, boosting morale and documenting the war crimes. Pilecki used couriers to smuggle out detailed reports on the atrocities. By 1942, he had also helped organize a secret radio station using scrap parts. The information he supplied from inside the camp provided Western allies with key intelligence information about Auschwitz.

“In the spring of 1943, Pilecki joined the camp bakery where he was able to overpower a guard and escape. Once free, he finished his report, estimating that around 2 million souls had been killed at Auschwitz. When the reports reached London, officials thought he was exaggerating. Of course today we know he was right.

“Here’s how a contemporary Jewish journal summarized Pilecki’s life: ‘Once he set his mind to the good, he never wavered, never stopped. He crossed the great human divide that separates knowing the right thing from doing the right thing.’ In his report Pilecki said, ‘There is always a difference between saying you will do something and actually doing it. A long time before, many years before, I had worked on myself in order to be able to fuse the two.’ The current Polish Ambassador to the U.S. described Pilecki as a ‘diamond among Poland’s heroes.’”1

Mr. Pilecki was not Jewish and didn’t need to worry about what was going on in those camps. As far as he and his colleagues knew they were work camps. But Pilecki wasn’t satisfied to stand by and watch. He had spent his life working for freedom and eventually gave his life because he refused to give up the names of the people with whom he worked.

Jesus was not human and He didn’t need to worry about anything here on earth. We blew it – he could have just created another world and forgotten about us. But Jesus couldn’t stand by and watch, either. He and His Father made a plan and snuck Him into our sinful existence. And just like Pilecki, Jesus risked all. He risked failure and eternal loss.

“In stooping to take upon Himself humanity, Christ revealed a character the opposite of the character of Satan. But He stepped still lower in the path of humiliation. ‘Being found in fashion as a man, He humbled Himself, and became obedient unto death, even the death of the cross.’ Philippians 2:8. As the high priest laid aside his gorgeous pontifical robes, and officiated in the white linen dress of the common priest, so Christ took the form of a servant, and offered sacrifice, Himself the priest, Himself the victim. ‘He was wounded for our transgressions, He was bruised for our iniquities: the chastisement of our peace was upon Him.’ Isaiah 53:5.