It’s hard for us to imagine ourselves in a world where devout men pray every morning on arising, “God I thank You that you did not create me a Gentile, a slave or a woman.” 1 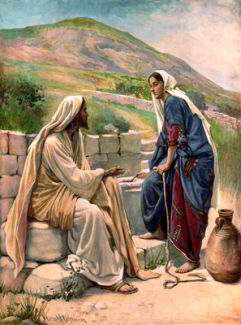 It was in such a society that Jesus ministered. The prominent role played by women in society, as related in Proverbs 31, had been denigrated to a role of servitude, most likely through the influence of heathen neighbors. Perhaps it will help us to imagine the role of Jewish women at the time of Christ if we realize that they were treated much the same as Muslim women are treated today in fundamentalist Muslim areas. Women were expected to stay at home and obey their husbands. They were considered inferior to men and not worth educating. They were not allowed to testify in court, along with minors, Gentiles and undesirables such as gamblers and the insane. 2

And then came Jesus.

Jesus was intentional in His ministry. When John tells us that “He had to go through Samaria on the way” (John 4:4), it wasn’t because that was the usual route Jews took to get from Jerusalem to Galilee. Even though it was the most direct route, the Jews took great pains to avoid all unnecessary contact with Samaritans and took a detour around the area. I believe that Jesus “had to go” this route, because He had an appointment that only He and the Father knew about. An appointment with a woman. A Samaritan woman at that.

When Jesus spoke to the Samaritan woman at Jacob’s well, He broke not only the taboo against speaking to Samaritans (the racism of the day) of anything but the most necessary business, but also the taboo against speaking to any woman in public. He addressed her as a person of significance, one who would appreciate spiritual truths. He spoke more plainly to her than He had spoken even to His disciples. When she expressed hope in the coming Messiah, He said, “I am the Messiah.” (John 4:26 NLT) And she responded to His direct approach by recognizing Him as the Christ. He sparked a faith in her soul that transformed her into an evangelist who persuaded the whole population of the town to come and see the One who had proclaimed Himself to be the Messiah.

Jesus spent several days in that town, and His heart rejoiced in the harvest of souls this very first female evangelist brought to Him – the “first fruits” of the millions that would follow some day. 3

Jesus cared for widows – women without status in Jewish society unless they were under the protection of a man, such as a son. It was because His heart went out to such a woman that He healed her only son. I believe that, too, was intentional. He met the funeral procession coming out of Nain for the specific purpose of relieving the grief of this one woman. (See Luke 7:13 and Desire of Ages, beginning p. 318)

When Simon the Pharisee held a feast for Jesus, he only saw a “sinner” who anointed Christ’s feet. (Luke 7:36-50) But Christ saw a woman of worth with traits of character that could bring glory to God. And as He accepted her offering of love, He read the desire of her heart and assured her that her sins were forgiven. And wherever the gospel has been taught, the story of this woman has been told as well. (You will be blessed as you read more about the “Feast at Simon’s House,” in The Desire of Ages, Chapter 62.)

When Jesus walked this earth, He healed and blessed both men and women, treating both with equal respect and concern. But that equal treatment was nothing short of a radical departure from the societal norms of His day.

When Martha fulfilled the traditional role of cook and hostess to the rabbi, Mary sat at His feet as a rabbinical student would. And Jesus told Martha that Mary had chosen the better part – a part that traditional Jews would not have allowed her. It was the women’s “role” to serve in the background. The students closest to the rabbi sat at his feet. Others stood around in a circle where women were not allowed. The women served in the background. But Jesus departed from the norm and affirmed Mary’s right to sit as a student at His feet. (See Luke 10:38-42)

I believe that Jesus was always intentional in His ministry. It is apparent that He purposely healed on the Sabbath, knowing it would offend the Pharisees. His intentional acts of healing stripped away the burdensome requirements of Sabbath keeping to demonstrate that the Sabbath was created as a blessing for humanity.

In the same way, I believe He intentionally chose women to be the first messengers of His resurrection. His treatment of women recognized the dignity of women and freed them from their traditional chains of subjection to men. In Christ, men and women would be equal and free – not just in regards to equal opportunity for salvation (that had always been available to them) but equal in their interactions and service in the community of faith. (See Matt 28:5-8, Mark 16:2-8, Luke 24:1-11, John 20:1-2) Compelled only by the spirit of Christ wives would be empowered to be subject to their husbands by choice, not by compulsion, and husbands would be empowered to love their wives as Christ loved the church and gave His life for the church. Together they would serve the Lord who set them free from the shackles of sin and the striving for supremacy. (Compare Matt 20:25-28 and Mark 10:42-45)

And wherever the gospel is preached and bears fruit in changed hearts, it is demonstrated in the lives of believers who “love each other with genuine affection and take delight in honoring each other.” (Romans 12:10 NLT)