Should you pay tithe?

I don’t think so. 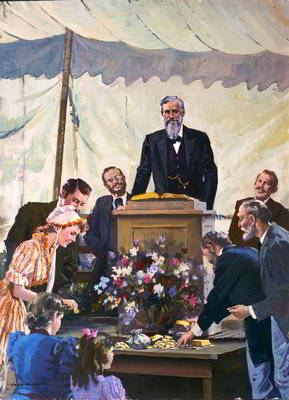 I think paying tithe is a heathen practice. (Please stay with me to the end.) Here’s why:

When I was just a little girl in Germany, my grandmother taught me about tithing. She taught me that the tithe belongs to God because I belong to God, along with all that is mine. But He only asks me to return a tenth portion to Him and lets me keep all the rest. And from the rest I may give offerings to show how much I love him. Sounded like a good deal to me then, and it still does.

The history of tithing is so shrouded in antiquity that we do not know just how it began, but it may be nearly as ancient as the Sabbath and marriage. The first mention of tithing in the Bible is a casual mention of Abraham returning a tithe to Melchizedek (Gen 14:18-20) whom Paul later refers to as a type of Christ. (Heb 5:6-10, Heb 7:1-9)

Just like the Ten Commandments, the practice of tithing was confirmed at Mt Sinai in the Exodus (Lev 27:30-33). It is not introduced as a new practice, but it is stated matter-of-factly that “A tithe of everything from the land, whether grain from the soil or fruit from the trees, belongs to the Lord; it is holy to the Lord.” The tithe was devoted to the support of the Levites who were consecrated to the service of the sanctuary and had no other source of income. (Num 18:21,24) Thus, in the Christian era, the tithe is reserved to support those who are recognized by the body of believers as having consecrated their lives to the service of God, leaving them no other source of income (1 Cor 9:8-14). The tithe, because it belongs to God, is thus “holy” (Lev 27:30) and using it for our own purposes is not keeping what belongs to us, but it is stealing from God (Mal 3:8).

While Christ did not specifically command tithing any more than He specifically commanded Sabbath keeping or marriage, He referred to it when He pointed out that the scribes and Pharisees tithed even the herbs of the garden while they neglected justice and mercy and faith. When he said, “These you ought to have done, without leaving the others undone,” He implicitly affirmed tithing by saying they ought not leave tithing “undone” (Matt 23:23).

The principle of tithing rests upon the fact that the Lord is our Maker, and we belong to Him by virtue of creation and also redemption. Thus all our time and possessions belong to Him as well. He asks us to reserve 1/7 of our time exclusively for Him as well as 1/10 of our material possessions in acknowledgement of His being Creator and thus Possessor of all (Ps 24:1). The tithe is also an acknowledgement of the fact that God is the one who gives us the power to make an income (Deut 8:18).

That’s why we return tithe to God; we do not pay tithe. We recognize that we are only managers or “stewards” of the Lord’s possessions. We are to manage His possessions in a way to glorify Him, the owner, not us, the managers. And I believe that the blessings promised in Malachi are ours to claim as well (Mal 3:10-12). From experience, I am quite sure that the 9/10 that the Lord allows us to keep will stretch much further with the Lord’s blessing than the whole would without His blessings. What a privilege to be in partnership with God as His managers!

The process of “testing” is generally reserved for the Lord, and the Bible warns us generally that we are not to “test God” (Ex 17:2; Deut 6:16). However, in the matter of tithing, the Lord specifically challenges His people, saying

Test me in this,” says the Lord Almighty, “and see if I will not throw open the floodgates of heaven and pour out so much blessing that there will not be room enough to store it. (Malachi 3:10) NIV

We have tested the Lord and found His promises true.

How about you? Will you share with us how you have tested the Lord and what the results of the test were?

And if you’ve never tested the Lord this way, why not start this very day?