Read 1Thessalonians 1:6-7. What is Paul’s message there? How are we to understand this in light of the idea of Christ as our ultimate example? 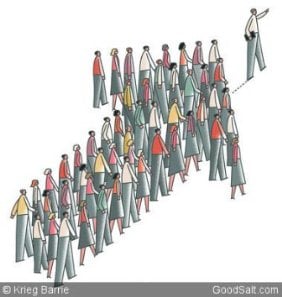 Most translations do not show this, but in verse 6 Paul continues the same sentence that he began in verse 2 and carries it on through verse 10. The main topic of this lengthy sentence is Paul’s list of reasons for the thanksgivings that he recites in his prayers. Verses 6 and 7 add two items to that list of thanksgivings, building on the “because” (NIV) at the beginning ofverse 5. Paul gives thanks (vs. 2) because (vs. 5, NIV) the Thessalonians have both imitated him and his colleagues and have themselves become an example to imitate (vss. 6, 7).

We often caution people that it is dangerous to imitate anyone but Christ. That’s true, because even the best of people will let us down sometimes. But the reality is that we need role models. People need each other at times for guidance, counsel, and help in working through specific issues and even hard times. Who hasn’t experienced the blessing of good counsel and of a good example?

Also, whether we like it or not, once we become leaders in the church, people will imitate us. How important, then, that “veteran” Christians live what they preach and model in life the things that they say.

At the same time, Paul has placed a couple of safeguards here. First of all, the imitation (vs. 6) follows the receiving (vs. 5). The primary focus of the Thessalonians was on receiving the Word of God and applying it directly to their lives through the Holy Spirit. God’s Word can always be trusted. Second, Paul directs them to the Lord as the primary model (vs. 6). What Jesus did, and would do, is a much safer model than what even Paul would do. After all, Paul was under no illusions about himself or his character (1 Tim. 1:15).

Having said this, however, Paul affirms their desire to imitate him as a beloved teacher and mentor, and also to become models worthy of imitation themselves. In this particular case, what was being modeled was joy in suffering. Suffering can make one bitter or better. In the context of the gospel and the power of the Holy Spirit, the Thessalonians discovered supernatural joy in the midst of suffering, just as Paul and Silas had earlier (Acts 16:22-25).