Friday’s section of this week’s lesson asks the question, “Once Jacob died, Joseph’s brothers feared that now Joseph would get revenge. What does this teach about the guilt that they still harbored? What does Joseph’s reaction teach us about forgiveness for the guilty?”

Maybe the brothers had a hard time believing Joseph had forgiven them because they had a hard time forgiving themselves. For spiritual growth and health I think its important to not only forgive others, but also to forgive ourselves. 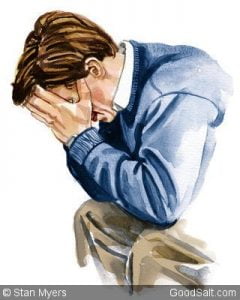 Ever been haunted by your past? Sometimes I will have a flashback of some off-the-cuff smart remark I made to an elder when I was kid, and I will still cringe and want to go hide under a rock 40 years later! I believe Paul’s history of persecuting Christians may have haunted him too. Except for the fact that Paul never persecuted the Christians. That was Saul. Paul was a new creature,

“Therefore, if anyone is in Christ, he is a new creation; old things have passed away; behold, all things have become new.” 2 Corinthians 5:17 NKJV

“Saul the persecutor was converted, and became Paul, the apostle to the Gentiles.” –Ellen White, Desire of Ages, Page 233

God wants to give us all a fresh, new start.

The story goes of a man who was driving down an old highway out in the country when he accidentally ran over a cat. He pulled over and inspected the cat, which sure enough was dead. He looked and saw a house in the distance at the top of a hill. He took the dead cat to the door and knocked. An old lady answered the door, and he said, “I am sorry Ma’m is this your cat?”

“Well it was she responded.” The man told her how sorry he was that he had just hit and killed her cat. She forgave him and they both took the cat to the backyard and buried it. A few weeks later the man found himself driving past the house again.

The terrible memories came back again, and he drove up to the house, went in the backyard, dug up the dead cat and took it to the front door again. When the lady answered, he started telling her all over how sorry he was! She reminded him she already forgave him and she helped the man bury the cat again. A few more weeks went by and the man found himself driving by the house again and once again was overcome with grief, and went and dug the cat back up and took it to the house. By this time the woman was fed up and ordered him to stop bringing the dead cat to her door!

God does not want us bringing dead cats to His door either. Don’t go digging up what His grace has buried. He wants us to leave our dead cats behind us and press for the goal. God wants to make you a new creature, just like He made Saul a new creature and turned him into Paul.