Further Study: “Paul had a view of heaven, and in discoursing on the glories there, the very best thing he could do was to not try to describe them. 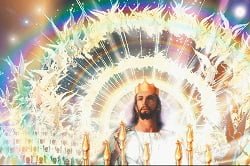 He tells us that eye had not seen nor ear heard, neither hath it entered into the heart of man the things which God hath prepared for those that love Him. So you may put your imagination to the stretch, you may try to the very best of your abilities to take in and consider the eternal weight of glory, and yet your finite senses, faint and weary with the effort, cannot grasp it, for there is an infinity beyond. It takes all of eternity to unfold the glories and bring out the precious treasures of the Word of God.”—Ellen G. White, The SDA Bible Commentary, vol. 6, p. 1,107.

“The abiding place of the King of kings, where thousand thousands minister unto Him, and ten thousand times ten thousand stand before Him (Daniel 7:10); that temple, filled with the glory of the eternal throne, where seraphim, its shining guardians, veil their faces in adoration, could find, in the most magnificent structure ever reared by human hands, but a faint reflection of its vastness and glory. Yet important truths concerning the heavenly sanctuary and the great work there carried forward for man’s redemption were taught by the earthly sanctuary and its services.”—Ellen G. White, The Great Controversy, p. 414.