Construction company chief Vladimir Vladovskyy knew it would take a miracle to build a Seventh-day Adventist church in the northern Russian seaport of Arkhangelsk.

He had no blueprint for the project. He had only a few summer months to build the church. And a senior city administrator, without giving a reason, had vowed never to sign the paperwork. 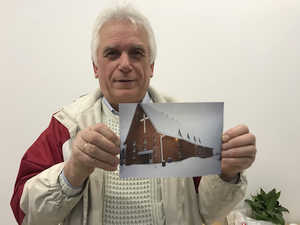 So, Vlodovskyy secured a blueprint for the church’s foundation and started work.

“Summer is very short in Arkhangelsk, and we didn’t have time to deal with bureaucracy”, said Vladimir, a Ukrainian native who has built 22 Adventist churches and other church facilities in Russia, Ukraine, and Mongolia over two decades. “So, we started building.”

After laying the foundation, Vladimir received the blueprint for the second stage and put his construction crew to work on the walls. Then came the next blueprint and the roof.

Remarkably, no one from the city government tried to stop the construction. Vladimir, however, had not forgotten about the official paperwork. Vladimir gathered his crew every morning to pray for a miracle at the construction site.

A month passed. Two months. Three months. Arkhangelsk’s summer lasts for only three months, from June to August. The exterior of the church was completed before the first snow fell in September. The interior was finished in December.

Vladimir returned to the city administrator to ask for the documents. He didn’t know what to expect, but he felt at peace, knowing that he had prayed daily and that the weather had stayed warm long enough to finish the church.

The city administrator didn’t way a word. He simply signed every document.

“In the end, he signed everything”, Vladimir said. “I don’t know why. It was a miracle.”

Vladimir, a third-generation Adventist who restored old buildings for a state construction company during Soviet times, has encountered many miracles since he first teamed up with the Adventist Church by constructing the Euro-Asia Division’s headquarters in Moscow in 1995. Currently, he is building churches in Krasnoyarsk, Tomsk, and a third Russian city.

But no miracle has been quite as remarkable as the one in Arkhangelsk in 1999, he said in an interview in Ukraine’s capital, Kiev.

“We built a church without a blueprint and without permission”, he said.

Vladimir Vladovskyy holding a photo of the Arkhangelsk church.