Read Genesis 2:7 and Genesis 3:19. From what was Adam made, and what was the result of his sin? 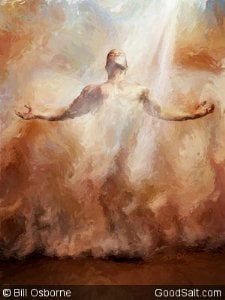 God created Adam from the dust, and he became a living being. As long as he maintained his relationship with God, his life would continue. When Adam sinned, he became separated from the Source of life. As a result, he died and returned to dust.

The promise of the resurrection provides hope for the Christian. Job expressed this hope, saying, “And after my skin is destroyed, this I know, that in my flesh I shall see God” (Job 19:26, NKJV). For the faithful, death is only temporary. The God who formed Adam from the dust and breathed life into him has not forgotten how to create humans from dust. The resurrection will be an act of creation just as much as was the original creation of Adam.

Read 1 Corinthians 15:52-58. What is taught here that is so inextricably linked to the Genesis Creation account?

The resurrection of the righteous at the second coming of Jesus is going to happen instantaneously. As with the first creation of humankind, it will be a supernatural event in which God does everything. All this is in blatant contradiction to theistic evolution. After all, if God isn’t going to use millions of years of evolution to recreate us, but does so in an instant, then He certainly could have created us without evolution in the first round. Thus, as with everything else in the Bible, the hope of the resurrection is more biblical evidence that refutes theistic evolution.

What should it tell us about the limits of science that, regarding something as crucial and fundamental as the resurrection, science offers us little light?