Back in 1991 my wife and I leased an old red brick building in downtown Nampa, Idaho, as our art studio. For $200/month we got 5,000 square feet of space on the second floor of a 100-year-old building, including a large room we used as our photo studio. After a year we ended up hiring an assistant and a couple young artists. 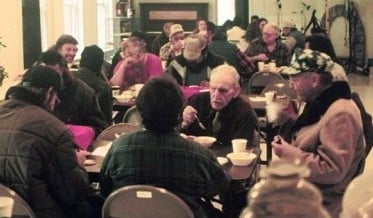 At some point in late 1992 we got the idea of opening a free hot lunch for whoever needed a good meal. The local Salvation Army ran a hot lunch program and they assured us they would be grateful to have one day off a week. As a teenager I had worked summers for an industrial catering company in northern British Columbia, so I felt comfortable cooking for a large crowd. We converted the room next to the photo studio into a kitchen, made a “Free Hot Lunch” sign for the sidewalk outside our building and waited to see what would happen. Naturally we had no idea what we were getting into.

Every Wednesday for the next 14 years, we fed whoever wanted a hot, nutritious and tasty meal. Our average weekly group was usually 40 to 60 people. It became a company tradition, and our staff would pitch in as they were able, as well as enjoying the free meals themselves. Most of all, my wife and I were blessed by the experience. We learned practical lessons about helping the poor that could not have been learned any other way.

Here is what we discovered. First, there are always genuinely needy people who are desperate for help. But then there are also freeloaders. The freeloaders would come upstairs and see what we had. If they didn’t like it, we’d notice them eating a meal in the restaurant across the street. Some were on government assistance, we assumed, because they didn’t work, but they seemed able-bodied and intelligent. A few actually had jobs and saw the free lunch sign and would simply stop by to eat in order to save money, never offering to help or pitch in. Our food was usually pretty delicious. A gourmet bakery in Boise, for example, supplied us with a weekly giant bag of their best rustic breads for years. We’d often have an ethnic theme – Chinese, Italian, Indian, etc. – and we would plate the food restaurant-style for our guests. In fact that was our mandate – to treat these people with the same respect as paying customers in a restaurant.

Over time we noticed that the ratio of truly needy people to these less-than-worthy folk was about 4 to 1, or about 25% freeloaders. But we also realized that this was the price of helping the truly suffering. There was no practical way to stand at the door and say “You can come in, but you can’t.” We had to let that concern go.

Our hot lunch program had the effect of putting dozens of people intimately into our lives. We got to know each by name. We learned their circumstances and their struggles. And we had our ideas about the poor turned upside down. We discovered what real disadvantaged struggling is. There are so many examples that come to mind, but I will mention Mike.

Mike looked to be around 45 years old when he first showed up for a hot meal. We came to know him as being kind and gregarious, cheerfully offering to help clean up after the meals or run an errand. One day in November I noticed his chronic cough and asked him how he was doing. He said that the rain was really getting him down. I asked why and was surprised by his reply. He said he was living in a hole he had dug in the ground which he shared with his dog, but that it was getting hard to keep dry with all the rain. I had to see this for myself, so I walked with him back to “his place” and, sure enough, in a field less than a half mile away by a railroad track was an old tree on an empty lot and a hole about three feet across. It was about 10 feet deep and lined all around with thick cardboard. It was hard to believe that he had lived in there since the past summer. I asked him if I could send one of our staff down to take a video of his home and he gave us permission. Somewhere I have that old video tape. We were able to get him into an inexpensive rental house and hired him as a part-time handyman. He worked for us for a few years until his emphysema got too bad to work and he passed away a couple years later. Mike was a hard worker and would do anything for anyone.

We also discovered that many people fall through the cracks. The ones that were suffering the most were those with mild mental and social disorders. People simply will not hire these people, but many choose not to take advantage of government social programs, or they are confused about what the government can do to help them. They basically struggle mightily from day to day.

We also learned that helping others doesn’t always end up like the happy news stories you see on television. We helped one homeless young man get back into school, even paying for him to attend an Adventist boarding academy. But eventually the earlier issues of abuse in his life, among other factors, lead him to quit school and return to the streets and drugs. But we still believe the seeds of hope were sown, so we never consider these efforts to be wasted.

Ultimately we learned that we couldn’t base our efforts only on what we thought would be the results. Ellen White writes about “disinterested benevolence” – the idea of helping with no thought as to reward or positive outcome. We do it because Jesus commands us to love unconditionally. That doesn’t mean throwing money and resources to the wind. But it does recognize that we leave the results to God and, most importantly, we acknowledge that to help others not only requires some sacrifice, but also that there will always be those that come along for the ride who are not worthy. The idea that one can help others in a meaningful way, without any risk that some of your efforts will be lost, is not realistic in this world. If you seek for a risk-free guarantee that the help you give will always result in success, then you will be disappointed. If you insist upon it, you will end up doing nothing.

Over time, my wife and I have realized that millions of people, either consciously or unconsciously, decide not to help because they are focused on the risks and the freeloaders. And that goes for government programs for the poor as well. In their way of thinking, the fact that some abuse the system is enough reason to end the help for all. The price of helping those 3 out of 4 people is too high if it means also helping that 4th person who does not need it. And God, being a gentleman, doesn’t force us to help anyone.

But oh the blessing these people miss out on! The Bible is not being idealistic or just lyrical when it states that it is “more blessed to give than to receive.” It is a principle of our existence. Over the years we had countless times when a grey discouraging day would reverse itself after feeding people less blessed than ourselves – at least in the material sense. We made many dear friends whom we would and could not have known without offering to help. Some we expect to meet again in heaven.

Often we’d only meet people once. Like the time a freak rain storm lasted three weeks and the local field laborers went without work or money. We saw those young men – most were probably undocumented workers – so desperately hungry, chowing down with grateful hearts, and the young woman with three little toddlers, who had arrived by the bus terminal a block away but whose expected help on arrival fell through, eating a hot yummy meal. We also saw the many “rail riders,”or modern hobos that would come up from the nearby railroad for our Wednesday hot lunch (word somehow spread up and down the railroad system) – as so many more people to bless us. They did more for us than we did for them!

There’s another lesson I recall: Family and friends were worried that having all these homeless people walking around our studio, filled with expensive high-end computer equipment and peripherals, artwork, and valuables, not to mention our children who had the free run of our studio, was too great a risk. We were warned we would be sorry for letting these people in unsupervised. But in 14 years we never had one single thing stolen, and our children grew up knowing that helping others is a way of life. When we moved to Canada and finally put a sign on our door that our Wednesday Hot Lunch program had ended, some disappointed person kicked our front glass door and cracked it. But that is all I can remember that was taken from us materially.

So how does this relate to the Syrian refugee crisis? It seems to me that I am hearing some of the same arguments that we faced when we started our hot lunch program. What about the bad people who could sneak in with the worthy poor? What about the danger that they will hurt us more than help us?

These questions can be answered by the Christian perspective. The Scriptures tell us that “While we were yet sinners, Christ died for the ungodly.” (Ro 5:6) The blood of Calvary paid the price for every person that will ever live, so great is that gift. But not everyone will be saved. The gift will be wasted on some. But God still gave it. He considered the risk worth it.

All meaningful charity carries risk. Love often demands we take the risk. If we want to be free of risk we can stay home, watch TV, criticize the efforts of others, and do nothing. Or we can encourage our government to use our tax dollars to help the helpless, knowing full well that there will be a price to pay for our benevolence. That doesn’t mean that we shouldn’t be extremely careful in our vetting and screening of refugees. But it certainly means that we don’t use the risks as a license to do nothing, which rejects the mandate we have as Christ’s followers.

Jesus said “Behold, I send you out as sheep in the midst of wolves.” And then He added “Therefore be wise as serpents and harmless as doves.” (Matt 10:16)

So is it really more blessed to give than receive? One’s faith can decide that question. Kim and I believe the answer is yes, not only in spiritual and emotional terms, but even in material terms. Helping the Syrian refugees will ultimately bless America. God has promised it will be so. In 1955 a baby was born in San Francisco to Joanne Schieble and Abdul Fattah Jandali, a Syrian immigrant. The child was born out of wedlock and was put up for adoption, certainly less than a perfect storybook start. But we all know that child as the co-founder of Apple, Steve Jobs, who, it could be safely argued, has been a materialistic blessing to the United States.

But beyond all these considerations is one underlying principle that must color our decisions: God is love. As individuals, and as a nation, we take risks to help others because that is the nature of love.