Larissa Madeline Van Bommel, a university student from Canada, was having a bad day in Germany. First, she got lost. Wandering around for a while, she entered an empty church outside Frankfurt. She had struggled with her faith since her mother had died, and she hadn’t prayed or visited a church in two years. 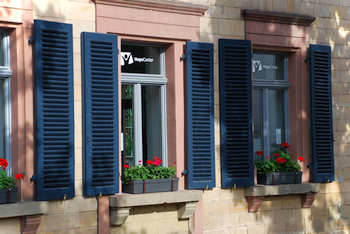 “I decided to take a seat and ended up praying and pouring my heart out and crying and crying”, she said. “I asked God for a sign that He is actually out there”.

Drying her tears, Larissa managed to find the train station — but then got confused and accidentally disembarked from the train in Bensheim instead of Bensheim-Auerbach. The next train wouldn’t come for some time that evening.

Tired and thirsty, Larissa hunted for water to drink. No vending machines were in sight, and all the shops seemed to be closed.

Some distance from the train station, Larissa spotted a bottle of water and several cups on a table outside a building. Desperately thirsty, she peered into the building’s window, saw young people eating around a kitchen table, and boldly walked in the front door. “May I buy a glass of water?” she asked.

The people promptly invited Larissa to join them for the meal.

Larissa had stumbled across a Seventh-day Adventist community center called HopeCenter, a place where people attend educational and religious seminars, participate in healthy cooking classes, or simply relax on a comfortable sofa and enjoy free WiFi. HopeCenters are the brainchild of Stimme der Hoffung (Voice of Hope), the German affiliate of the Adventist Church’s Hope Channel, and the first two centers opened in Germany in 2017. Plans are in the works to open at least 14 more HopeCenters.

After sitting down to eat, Larissa noticed a “HopeCenter” sign in the window and asked about it. Her new acquaintances explained that they were Christians and that their Adventist church had opened the HopeCenter as a place to mingle and make friends. Abruptly, Larissa remembered her prayer for God to prove His existence. “I immediately started crying and told them how just a couple hours ago I had begged God for a sign, and I knew this was it”, Larissa said.

“You will never know how much your kindness touched me”, Larissa, now a student in the Netherlands, wrote in a post on HopeCenter’s Facebook page. “God bless you, and may many others be blessed by your kindness”.

She added: “The HopeCenter is an incredibly beautiful idea and should be spread throughout Germany, as well as Canada, and the rest of the world. Thanks to you, I’m crying happy tears now”.