Stepan Avakov, born and raised in Azerbaijan’s capital, Baku, had his life planned out at the age of 13. He loved basketball and claimed the title of best player in his age group in Azerbaijan. 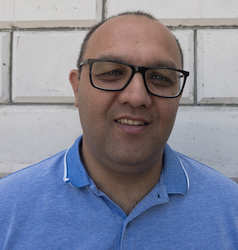 “You have nothing to worry about”, his coach said. “You will become a professional basketball player”.

One day, a group of students burst into the school classroom during the lesson.

“We will kill him!” snarled another.

The students dragged Stepan to a square in front of the school, where an angry crowd of fellow ethnic Azeris waited. As Stepan braced himself for the worst, his captors inexplicably relaxed their grip. An Azeri classmate appeared beside Stepan and pulled him to safety.

Once away from the crowd, the two boys ran to Stepan’s house, where the young rescuer left Stepan with his mother. Stepan never saw the boy again.

Mother refused to allow Stepan to return to school and, a month later, in late 1989, the family fled to Russia to save their lives.

Stepan struggled to adjust to his new life in Volgodonsk, a city of about 175,000 people in southern Russia. He tried to play basketball, but something was broken inside him. He couldn’t understand why lifelong friends had turned against him because of his ethnicity. His heart searched for answers.

One day at school, the history teacher announced that she had invited a guest to speak about biblical history. The guest teacher stood up and spoke about the prophecy of the image in Daniel chapter 2. Stepan listened with deep interest. He had never thought about God, and for the first time in his life he considered the existence of a God who rules over the Earth. He wondered whether God knew his future. After the class, Stepan approached the guest teacher with many questions.

The woman shook her head. “My husband, who is a pastor, will be at the school in two weeks”, she said. “He can answer your questions”.

Two weeks later, pastor Veniamin Tarasyuk taught the history lesson. He proposed four questions that every person should answer: Who am I? Where do I come from? Why am I here? What will happen after me? The questions shocked Stepan. He had never considered them.

Stepan went home determined to find God and answers to the four questions. He found them when he was baptized a few years later. “I lost peace when I had to flee Baku”, said Stepan, pictured. “I was looking for peace all my life until my baptism”.