Igor Gospodarets ordered 800 colorful evangelistic posters reading “Bible Opens the Path to a Healthy and Happy Life” from Moscow. He plastered the advertisements around his city in a former Soviet republic where a majority of the population is not Christian. 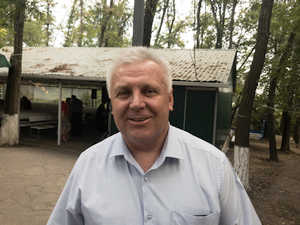 Then an elderly evangelist told him to start over.

Igor couldn’t believe his ears. The posters had taken considerable money and time, and he didn’t want to start from scratch again. “Why?” he asked.

“Our goal is not to make Adventists out of non-Christians”, Schmidt said. “Our goal is to make friends”.

It was 1992, only a year after the collapse of the Soviet Union. Igor, a young Adventist pastor, was eager to take advantage of new-found religious freedom to share his love for Jesus.

He didn’t like Schmidt’s advice. It didn’t make sense to him to not preach Jesus. He didn’t see the logic of offering stop-smoking classes. He didn’t want to lose the money invested in the evangelistic posters. He prayed.

Finally, Igor decided to take a chance. Perhaps the elderly evangelist knew something that he didn’t. Igor ordered 800 stop-smoking posters from Moscow and placed them over the old posters.

A surprise greeted Igor’s eyes when he showed up for the first stop-smoking seminar. The rented hall was packed with 1,000 people. Most of the visitors were not Christians. Igor realized that the original posters never would have attracted such a large turnout.

Five years passed. After a Sabbath sermon, a stranger reached out to shake Igor’s hand in church.

“Do you remember me?” the man asked.

“I was in that crowd of 1,000 people who took the stop-smoking class five years ago”, the man said. “I heard you and Pastor Schmidt speak”.

The man explained that he had been raised in a non-Christian home and had struggled to quit smoking. The seminars had helped him stop and, realizing that the Adventists were his friends, he had started attending church every Sabbath.

“It was at that moment that I understood the importance of friendship evangelism”, said Igor, now 59 and a church leader in southern Russia. “Our goal is not to make Adventists out of non-Christians. Our goal is to make friends for Jesus”.