Nineteen-year-old Simo Vehkavuori began to rethink his life while visiting a Seventh-day Adventist uncle and aunt in Sweden. The Finnish teen remembered failing to fulfill a promise to follow God at a summer camp three years earlier, and he anxiously wondered, “Have I lost God’s grace?” 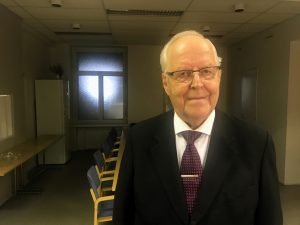 One night, he went to the back garden and, weeping, knelt by a large lilac bush. “Jesus, if You still accept me, if tonight is the right time to give my heart to You, please show me”, he cried. “Perhaps allow a star to fall in the sky”.

As he stood up, an enormous star fell in the night sky.

When Simo returned home to the family dairy farm in Finland, the farming community soon heard about his decision to follow God. Some people snickered, and Simo wondered whether he should be so open about his faith.

One evening, a government inspector showed up for regular check as Simo milked the cows in his father’s brick barn. She had heard about his conversion, and she spoke mockingly.

“Listen, a little bird is spreading a rumor”, she said as Simo milked a cow by hand. “I hope that you did not become a Christian in Sweden. Wouldn’t it be better for you to go to dances and movies with other young people and to squeeze all the joy out of the world that is possible?”

Looking up at the woman, Simo said, “My dear friend, this evening I can tell you that I met Jesus as my personal Savior in Sweden, and I want to follow Him wherever He leads”.

He had scarcely finished speaking when a loud explosion rocked the barn. The cow that he was milking dropped to the ground dead. The other cows collapsed on their knees. Silence filled the barn for a moment. Then the cows began to moo madly, their mooing sounding like barking dogs.

Ball lightning, the size of a golf ball, had fell to the ground and exploded between Simo and the cow. Simo’s rubber boots had protected from the shock.

The inspector stood frozen on the concrete floor. Her face was pale. Her instruments had tumbled into a gutter filled with cow dung. Finally she spoke.

“Simo, can you forgive my careless words?” she said. The mocking tone was gone. “We are like dust when nature manifests its power. Stay on your chosen path”. After a pause, she asked, “How can I get on the same path as you?”

Simo resolved at that moment to never be shy about sharing his faith. In his room that night, he prayed, “Take my whole heart and life, and let me follow wherever You lead me”.

Simo, now 84 and retired, served as a pastor and church leader for many years in Finland.