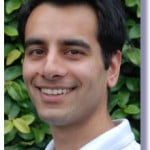 I grew up in a non-Christian family in India. I attended a Christian boarding school and lived a highly regimented life. So I wasn’t ready for the freedom I found when I moved to Australia at age 16 to study.

Many of the young people at school smoked and drank. I wasn’t interested in these things and avoided the young people who were involved in these activities. I attended church for my first year in Australia, but then I quit. I told God that I wanted a break from Him, to see what life was like without Him. That was the most miserable year in my life.

I finished high school and started my university studies. One day while studying, I felt a sudden pain in my chest. I thought I was having a heart attack. Then I realized that it wasn’t physical pain, but an ache for something. Could this be God? I wondered. I hadn’t prayed in a year, but that day I prayed. “God, if this is You, please take away this unbearable pain!” The pain went away, and I forgot about it. But when the pain returned, I knew it was God speaking to me. I found a church and attended a few times. But my job in a bar required me to work Friday, Saturday, and Sunday so I quit attending church.

One evening on the train home from work I met a young man, Daniel, and his friend, Keith. Daniel struck up a conversation with me. I asked him why he had chosen to speak to me, and he said God had prompted him. We continued talking, and he invited me to his home for dinner. I gave him my phone number. I got to know Keith, and I sensed that he knew God. The peace I saw in him made me wish for a relationship with Christ. I accepted his invitation to worship with him on Saturday, but the idea of worshipping on Saturday instead of Sunday seemed strange.

I graduated and began searching for a job. I couldn’t find one, and I felt frustrated and out of control. I remembered Keith and the peace he exuded. I visited him, and he invited me to a small group meeting.

I went. The group was indeed small, but the members were so genuine, friendly, and loving that I enjoyed attending. As I studied the Bible I realized that it was the Holy Spirit who had been speaking to me all these years, urging me to let God back into my life. I had come to God broken and hurting, but God put me back together.

I learned that the small group meeting was actually a Global Mission church plant designed to attract young people just like me.