Fanta Camara was excited when she noticed a bump on her belly. But as the bump grew bigger, she began to feel ill. She felt so terrible that she went to the hospital in Conakry, Guinea. 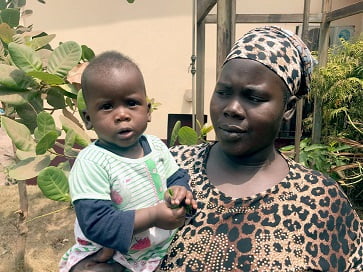 A physician examined her belly. “You aren’t pregnant”, he said.

Fanta didn’t believe the physician. She asked a relative, who was a nurse, to take a look. “You are pregnant”, the relative said. “There is a baby in your belly”.

Fanta beamed with joy. But she still felt ill, and the relative wasn’t sure how to help. She went to another hospital. “You aren’t pregnant”, the physician said.

Fanta visited a third hospital. “You are pregnant”, the physician said. But he didn’t know how to help.

As the weeks passed, Fanta’s health worsened. She could barely walk.

Five months after Fanta noticed the bump on her belly, a stranger appeared in her bedroom. He had the feet and legs of a man but the chest and face of a leopard. Fanta was scared. “You will not have that child in your belly”, the stranger said, and, turning, seemed to walk out through the bedroom wall.

The next night, the stranger again appeared in the bedroom. “You will not have that child in your belly”, he said. Every night he visited Fanta.

A year passed. Two years. As the third year started, Fanta was still pregnant and miserable. Then she remembered Tranqulle Fassinadouno. She had ignored him because he was the only Christian in their neighborhood, but now she was desperate. After hearing her story, Tranqulle, a Global Mission pioneer, prayed and fasted for three days, asking God for wisdom.

Then he went to Fanta and, opening his Bible, read Ephesians 6:12, “For we do not wrestle against flesh and blood, but against principalities, against powers, against the rulers of the darkness of this age, against spiritual hosts of wickedness in the heavenly places” (NKJV).

That night, Fanta was lying in bed when the evil spirit appeared. Before he could speak, she said, “Leave in the name of Jesus Christ”. The evil spirit immediately disappeared in a cloud of smoke, never to return.