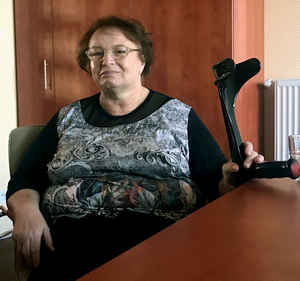 Then her son Grzegorz died in a freak accident when he was 26. He had taken up running and, while jogging near railroad tracks, was sucked onto the tracks by the wind of a fast-passing train.

Jacek committed suicide at 28. He struggled with life and hanged himself.

Slawek was 39 when he was beaten badly in a street mugging. He died in the hospital.

Her last son, Jaroslaw, was diagnosed with a brain tumor when he was 16. After multiple operations, he died at 33.

Wieslawa has no sons to turn to for help in her old age. At 68, she is in failing health. She has diabetes and has suffered two strokes. She has severe back problems and walks with a cane. She has lost most of her sight and expects to go blind.

Several years ago, a young medical student, Tomasz Karauda, knocked on her house door with a free copy of The Signs of the Times magazine. After that, he visited often to talk and offer encouragement. He helped her travel to the hospice to visit her dying son Jaroslaw, and he comforted her the day that he died.

“Tomek was the first person in my life who helped me”, Wieslawa said. “He showed me God”.

After she lost her last son, she gave her heart to Jesus.

“I feel like Job”, she said. “I have received so much, and I have lost so much as well. But God has given me a second life, just like Job”.

Wieslawa loves Psalms 23:4, which reads, “Yea, though I walk through the valley of the shadow of death, I will fear no evil; for You are with me; Your rod and Your staff, they comfort me” (NKJV).

Wieslawa, pictured, also loves to share her life story with Adventist congregations. Young people usually respond with tears. She tells them that she would never want anyone to suffer an ordeal like hers.

“God’s love keeps me alive”, she said. “My new life began with baptism. Without God, I don’t know what would have happened to me”.

Thank you for your Thirteenth Sabbath Offering in 2017 that helped build a television studio for Hope Channel in Poland, broadcasting the gospel to the Polish-speaking world.