A 30-year-old woman was admitted with a bad case of pneumonia to Blantyre Adventist Hospital in Malawi.

When she didn’t improve with antibiotics, missionary physician Tiffany Priester ordered an HIV test. The results came back positive. She had full-blown AIDS. 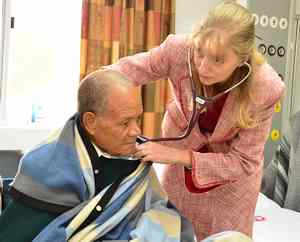 Tiffany explained to the family that it usually takes three weeks to treat pneumonia and there was a 50 percent chance that she would make it. But then the woman began to suffer kidneys problems, and her chances of survival plummeted to 10 percent. Tiffany told the family that there wasn’t much hope.

Surrounded by the family, Tiffany prayed for a cure and put the patient on a ventilation machine.

The woman’s kidneys shut down 24 hours later. All hope seemed lost. But then she began to recover. A few weeks later, she walked out of the hospital.

“Medicine has its limits”, Tiffany said. “The hospital does what it can do, and the Lord does the rest.”

Tiffany, a U.S. cardiologist, worked for five years in Blantyre, the second-largest city in Malawi with a population of about 1 million. Blantyre Adventist hospital – which employs six missionary doctors, two missionary dentists, and seven Malawian doctors – did not have a cardiologist for the decade before she arrived in 2011, a common problem in a country with only one medical doctor for every 88,000 people.

Malawi has a population of 18 million, including about 483,000 Seventh-day Adventists.

Tiffany said her motivation for mission service is John 13:35, where Jesus says, “By this all will know that you are My disciples, if you have love for one another” (NKJV).

One day, a Malawian woman complained that she awoke with her heart pounding every night around midnight. Tests came back normal, and other doctors might have written off the case as the result of bad dreams. “But that day I think the Holy Spirit prompted me to ask more”, Tiffany said.

Tiffany learned that the patient had started having sleeping problems after meeting a self-professed prophet who had warned her that she would be raped at midnight. Tiffany asked the woman whether the man or God was stronger. “Put your trust in God”, she said.

“You are the first doctor to tell me that God is strong”, the woman replied.

This, said Tiffany, pictured left, is what it means to “love one another” – making an extra effort to provide physical, emotional, and spiritual healing.

“Sometimes it’s the small things that set us apart”, she said.