Maria Samo has HIV and is praising God. 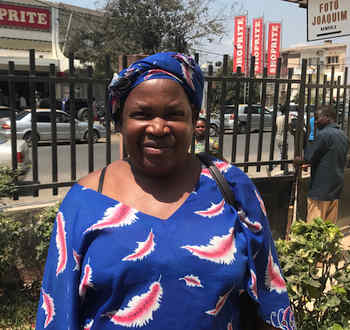 Maria was born into a Seventh-day Adventist family in the village of Nicuadala, Mozambique, and got baptized at the age of 7. Her village had no high school, so she moved to Quilimane, a 30-minute drive to the south, to continue her studies. There she made new friends who introduced her to alcohol and tobacco.

Maria’s parents didn’t know that she smoked and drank until after she got married. Her father came to visit one day and walked in as Maria was smoking. He didn’t say a word, but guilt washed over Maria, and she resolved never to smoke or drink again.

Quitting smoking proved easy, but drinking was much more difficult for Maria. She prayed for help. God answered in an unusual way, she said. She began to suffer severe panic attacks.

Maria quit with the help of a 45-day rehab program and, returning to Mozambique, re-consecrated her life to Jesus.

Then her husband died. Six years later, she received the shocking news that he had been infected with HIV and passed on the virus to her.

“From that time”, she said with a smile, “I have been praising the Lord”.

The reason is because she feels healthier than at any other time in her life.

“My health is better than it was before I contracted the virus, and my conscious is clear”, she said.

Today, Maria, a grandmother of four, works as a trader, buying gold and precious stones in various villages and selling them in Nampula, Mozambique’s third-largest city. But her passion is encouraging others with HIV.

“Many people lose hope when they learn that they are infected”, she said. “They don’t have anyone to talk to, and they die.”

She said Adventists should have a special burden to reach out to those with HIV, praying with them and encouraging them.

“I share the hope that I have in Jesus and His soon coming”, she said.