Tomasz Karauda, a 28-year-old Seventh-day Adventist physician in Poland, was asked to sign the death certificate of a woman who was still alive. 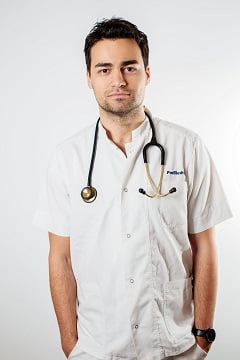 A nurse wheeled the woman over to the respiratory unit where Tomasz was doing his hospital residency.

By all appearances, she was dead. She had lung cancer, brought on by years of smoking. Rigor mortis was setting in, with the blood settling in her lower back. Her skin, usually pink as oxygen-filled blood flowed through her capillaries, had turned pale as her blood drained into the larger veins. Her condition was irreversible.

“I had never seen anything like that before”, Tomasz said, recalling the moment. “She was dead, yet she was sitting in the wheelchair and talking”.

The woman had been hospitalized in the crowded intensive care unit, but her physician, seeing that he could do nothing more, had sent her out in order to free up a bed for another serious case. The nurse asked Tomasz whether the woman could stay in the respiratory unit.

The respiratory unit also didn’t have any free beds, so Tomasz placed a rolling bed into the corridor and gently laid the woman on it. Pulling up a chair, he sat down and spoke with her for the next two hours.

The woman knew that she was dying. She expressed regret over her life choices.

“I spent my entire life smoking”, she said. “If only I could go back and do it over again”.

Tomasz didn’t know what to say. He felt like he was caught in the biblical story of the thieves on the cross. He held the woman’s hand.

“It is a great responsibility to be a Christian physician”, said Tomasz, who studied at a public medical school. “No one taught us in medical school how to deal with a situation like that”.

He has found that is helpful to take someone’s hand and offer hope, saying, “Everything is going to be alright”, even though the dying person knows that the only thing waiting is death.

“Sometimes it’s best thing to say nothing at all”, he said. “Sometimes the only thing you can do is hold someone’s hand and pray silently”.

The world is dying in sin. In many cases, rigor mortis is setting in, and the condition may seem irreversible. Will you hold someone’s hand? Will you pray? Will you offer hope?