↓
Home→Daily→Inside Story: The Power of Many 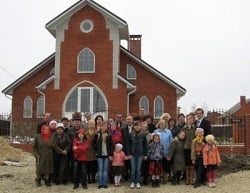 The Temryuk, Russia church and members
Courtesy of GC Office of Adventist Mission

Believers in western Russia work together to win their neighbors—and sometimes thieves—to Jesus. They write the names of people for whom they are praying in a book at church. Then they deliver tracts or newsletters to those people during the week.

One woman who owns a goat farm asked God who to pray for, and God showed her in an unusual way. The woman noticed that her goats were disappearing. Then she found a man lifting one of her goats from its pen. She stopped him. My family is hungry, the man said. If I sell the goat, they can eat.

The woman asked the man to put the goat back into its pen while she prepared food for his family. She gave him the food and some missionary tracts as well. The man’s family read the tracts. The man now works as a goat herder for the Adventist woman, and his family worships with the Adventist congregation in town.

Three sisters were praying for an apartment to rent. An old woman offered to rent them an apartment, and the sisters moved in.

Through their faithfulness in sharing their faith, a congregation has grown. But the members had no church in which to meet. The nearest church was several miles away in another town. They struggled to raise money for a church until the Thirteenth Sabbath Offering helped make their dream a reality. Today a simple church stands in this town in western Russia, a lighthouse and a testimony to the power of many working together as one to finish God’s work.