Six-year-old Timo Flink looked with awe at a picture of Jesus’ second coming in Arthur Maxwell’s The Bible Story. Unable to read, he stared at Jesus sitting on a cloud of angels. “I want to be up with the angels”, Timo thought. 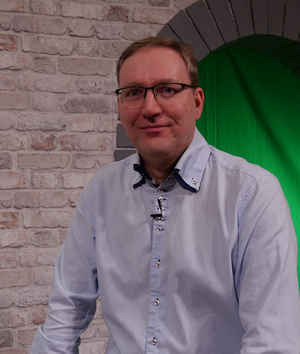 As a young adult, he wanted to serve God but became distracted with computers. As he studied to become a software engineer, he joined a group of young adults who discussed the Bible every Friday evening with a pastor.

At the same time, Timo joined a group studying Revelation. He sensed that the book was important, but he couldn’t understand it. He prayed for understanding.

At the height of his confusion, he visited his parents during spring break. Sitting down to eat, he was surprised to see a book. His father didn’t read much, and he wondered why the book was on the kitchen table. “What’s this?” he asked.

“The postman delivered it yesterday”, Father said. “It’s from a distant relative”.

Timo took a closer look at the book. Its title was The Great Controversy, and in smaller text he read the words, “Ancient prophecies are coming true”. At that moment, he remembered the picture of Jesus’ second coming from his childhood.

Three days later, he had finished the book. It answered all his questions about Revelation and infant baptism. “This is what I have been looking for”, he thought.

Timo read the book again that summer and a third time in the fall. Then he saw a newspaper advertisement for a Daniel seminar at the Adventist church. He had read about Adventists in The Great Controversy, and he went. He was baptized.

An article about his baptism subsequently appeared in the church magazine, which publishes announcements about all baptisms. Across Finland, the distant relative who had mailed the book rejoiced at the news.

Timo, pictured, gave up computers to become a pastor and now is 45 and communication director for the Adventist Church in Finland. To this day, he doesn’t know how The Bible Story ended up in his grandmother’s house. She somehow found the Finnish-language edition, and he looked at it when he visited her.

The Great Controversy also holds a special place in his heart. Every Friday evening, he reads from the book for family worship. “My wife thought we needed to teach our children the more serious side of what we are facing now”, he said. “So we decided to do The Great Controversy”.

Finland is part of the Trans-European Division, which will receive the Thirteenth Sabbath Offering this quarter.