Charlie Tui, like many young men in the island nation of Vanuatu, had come from an outer island to the capital city looking for work. Charlie found a job and moved into a barracks with other young men from his home island. The friends spent their weekends drinking and smoking. 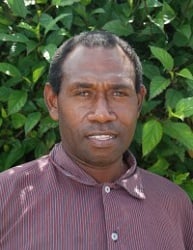 But one man was different. Jeffery didn’t smoke or drink, and he wasn’t interested in using marijuana. The other men learned that Jeffrey had become an Adventist after attending an Adventist secondary school. Charlie and his friends teased Jeffry mercilessly.

One day Frank, one of the guys in the barracks found a slip of paper near Jeffrey’s bed. It was a tithe receipt from an Adventist church. Hey, Jeffrey! Do you really give this much money to a church? he asked, teasing.

Jeffrey answered simply that God demands one-tenth of our income. The guys were surprised, because on their island their families had paid their pastor with a basket of food or a chicken. They sat down to listen as Jeffery explained important doctrines of the Bible. Surprised by their interest, Jeffrey asked if they wanted to know more about the Adventist church, and several of the men agreed. Jeffrey invited a pastor to come to the barracks to study with his friends. About 10 of the men met with the pastor each week.

Charlie lost interest in the Bible studies, but three others joined the Adventist Church. Charlie’s life changed too—for the worse. While out partying with friends, he was injured in an automobile accident that killed the driver’s girlfriend. When Charlie sobered up, he was haunted knowing that he could have died as well.

Then Frank, one of his friends who had become an Adventist, invited Charlie to attend meetings at his church. Charlie agreed. This time he listened carefully and realized that the speaker told the truth. He wanted to know more.

Charlie invited his girlfriend, Agnes, to join him. She didn’t want to, but she reluctantly agreed. Charlie asked for prayer to stop drinking and smoking, and God delivered him. He prepared for baptism, but Agnes took longer to be convinced. Two years later she, too, joined God’s remnant church. They were married.

Charlie and Agnes’ families resist their invitations to consider the Adventist faith, but at least now the families speak to the couple. Charlie and Agnes pray for opportunities to share their faith with them.

Charlie Tui is captain of a fishing boat in Port Vila, Vanuatu.