↓
Home→Feature→Lord of All Nations (Amos) 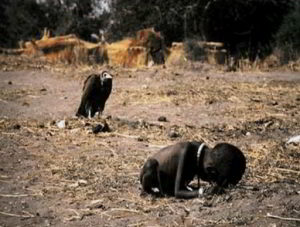 “Is not this the kind of fasting I have chosen: to loose the chains of injustice and untie the cords of the yoke, to set the oppressed free and break every yoke? Is it not to share your food with the hungry and to provide the poor wanderer with shelter—when you see the naked, to clothe them, and not to turn away from your own flesh and blood?” Isaiah 58:6-7 NIV

It is a sad reality that in this world, many still die of starvation. With bloated bellies of malnutrition, surrounded by tooth-pick limbs, they weakly stagger in search of food until finally their bodies will carry them no further and they die, perhaps asking, “Why?” Too often, the only answer is that the geography of where they were born destined their lives to be short and sad. If anyone notices, it may be only to curse a God who would allow such a thing. “Why doesn’t God do something?” they ask. “If God were truly loving and kind, He would not allow this to happen.” However, are we turning a blind eye to God’s intervention in order not to see it? As the proverb goes, “There is none so blind as he who will not see.”1

So what are we missing? Where does our blindness lie? Perhaps our blindness lies in not seeing ourselves as the instruments of God’s intervention. In other words, maybe God has indeed done something. He has placed us here. C. S. Lewis wrote a science fiction trilogy in which he offered a similar understanding. The main character, Ransom, perplexed at God’s apparent impotence in the face of evil determines that God has placed him in the world to do just that—battle evil.2 While Ransom is an allegorical representation of Christ, we cannot escape Ransom’s revelation by asserting that we are not Jesus. The Bible makes our kinship far too clear for that.3 As children of God, we inherit the struggle. Some may feel that this struggle is Christ’s alone and this may be reflected in their translation of the purported Messianic Promise after the fall in Genesis 3.4 The translation is offered as though the subject of the action were “He,” yet there is no absolute “He” in the Hebrew text. The third person singular verb can just as easily support the translation “it.” The pronoun Hu in Hebrew, even today, may still be translated as either “he” or “it.”

Perhaps you can see where I am going with this. If one wants to have the passage refer to a future Messiah, that would be more clear with a translation of “He.” However, if the passage is merely referring to the ongoing conflict between the children of mankind and the Evil One, the translation “it” might make more sense. Contextually it could refer to “seed” in a plural sense as all the offspring of Adam and Eve as opposed to one. As the antediluvian story develops in subsequent chapters, this reading is more consistent with those events as well. Interestingly, Paul tried to force the idea of “seed” into a reference to a singular Messiah in his letter to the Galatians.5 However, the Hebrew sometimes translated as plural “seeds” in the King James Version is translated as the singular “seed” in the NIV. This shows that while the King James is strongly influencing the translation one way, more modern translations may go in the other direction. Which is correct? It may be simply a matter of current usage.

The Hebrew of Deuteronomy 22:9 uses the singular noun for “seed” even though apparently referring to more than one. While this may differ somewhat from King James English, it is coincidentally in line with what modern English usage offers us, as we often say singular “seed” when referring to many seeds. For instance when we are in the garden store, we may ask for a bag of grass seed for our lawn. We do not say bag of grass seeds, even though we mean more than one seed.

Why do I labor this point? Because what we read into the text through imprecise translation due to vernacular usages can profoundly affect our understanding, perhaps to the point of completely missing important inferences. In this particular instance, we may miss the important part the descendants of Adam and Eve are to play in the ongoing battle with evil. If, as C. S. Lewis appeared to feel, we are the “something” that God is doing about evil, then this verse may represent a call to battle with the hope of an ultimate victory. This does not mean there is no Messianic promise, but perhaps in a broader sense than we previously realized.

Our role in confronting evil cannot be limited to simply prayer and platitudes. As Isaiah, chapter 58, at the top of the page, shows, it is also a call to social justice and welfare for the less fortunate. Sadly, far too many Christians, today, excuse themselves from the field of battle by referring to social welfare as just socialism benefiting the needy at the expense of everyone else. They sometimes feel that the poor deserve their plight, as though it is a result of some shortcoming or sin in their lives that they are suffering. They overlook that the Bible says we are all shortcoming “sinners.”6 If the Bible is true on this, then by their logic, they should be enjoying the same fate as the needy. I suspect that few would agree to that as their attitude toward the poor is not based on logic, but rather on selfish greed.

Greed is like a ravenous monster. The more one feeds it, the more it wants. There is never enough money in the world to feed this beast until it is sated. Yet, this does not stop us from believing that if we only continue to accumulate and not disburse unless we absolutely must then someday we will no doubt reach that magical “enough.” What is that figure? No one knows. Perhaps because there is never a time when everything we want is attainable with the resources we have in hand. Could we find it possible to ever be able to say it is not necessary to own everything one wants to be happy? Maybe we should try. Maybe there can instead be a sense of fulfillment from providing for others’ wants.

Some might feel that those they help will only want more, but isn’t this simply a recognition of the very problem we are talking about—want that never ends? If so, then aren’t we “the pot calling the kettle black?” Could we be forgetting that the One who owned everything and had no reason to give anything to His enemies, did so anyway?7 Certainly a case could be made for not wasting resources on an enemy if we are to base sharing our blessings on deservedness. But we cannot make the case that we deserved to have God offer His Son on our behalf. We have no merit to offer for such a gift. Should we then demand that of others?

Strangely, although we can never demonstrate our worthiness to receive such a gift, we prattle on about only helping the deserving, “worthy” poor. We are like the man who was forgiven a great debt and yet begrudged the individual who had not repaid a few dollars.8 In spite of our own unworthiness to have the blessings we do, we too often grudgingly share them with others, feeling they are not worthy of our largess. Ultimately we must discover that the answer for need is whatever gift is in our power to bestow.9 One day, just as that debtor who failed to imitate the example of the one who forgave him so much, we will be called to account. We will not be asked to answer how much we have been able to accumulate and how comfortably this allowed us to live. No, we will be examined based on our generosity in the face of everyone’s unworthiness.10

When faced with the person whose moral failure caused them to end up in prison, what did we do? When faced with the sick person did we diminish their worthiness and therefore our need to help them by discussing their poor lifestyle and diet choices? When faced with the hungry using food stamps at the cash register, did we look down on them and feel superior because they were somehow still able to buy cigarettes? When we see a child without a winter coat, do we make sure they have one or do we justify not helping by telling ourselves that their parents are probably spending all their money on drugs or alcohol instead of clothing the children? It is not enough to help only those who deserve it.11 If God did that with us, where would we be?