The seriousness of Paul’s words in Galatians 6:1 — to guard our own lives lest we also follow into temptation — should not be overlooked. 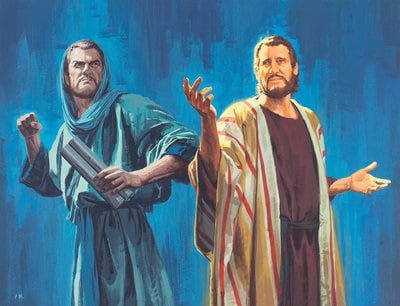 An indication of the urgency and personal concern behind Paul’s counsel can be seen in the way he makes his appeal. The word translated “considering” (KJV) or “take care” (NRSV) literally means “to look at carefully” or “to pay careful attention to” (compare Rom. 16:17, Phil. 2:4). So, what Paul literally is saying is, “keep a careful eye on yourself” lest sin also takes you by surprise. To highlight this warning, Paul switches from the second person plural (“you all”) in the first half of Galatians 6:1 to the second person singular (“you”) in the last half of the verse. This is no general warning that applies to the whole congregation; it is a personal warning addressed to each individual within the church.

Paul does not explicitly identify the nature of the temptation that he so strongly warns the Galatians against. Perhaps he didn’t have one specific trespass in mind but was simply referring to the danger of committing the same sin, whatever it is, from which they are trying to restore another. At the same time, his words in Galatians 5:26 against becoming “conceited” (NKJV) suggest that he is warning them against feeling that they are in some way spiritually superior to those they are restoring.

One of the greatest dangers to the Christian walk is a sense of spiritual pride that makes us think we are somehow immune from committing certain types of sin. The sobering fact is that we all have the same sinful nature — a nature that is opposed to God. Thus, without the restraining power of God’s Spirit, we could stoop to just about any sin, were the circumstances right. Such an awareness of our true identity outside of Christ can keep us from falling into the sin of self-righteousness, and it also can give us greater sympathy for others who make mistakes.