Read Isaiah 36:1-3 and Isaiah 37:14-38. In this account of a massive Assyrian campaign against Judah, how does God deliver His people?

In 701 B.C., Sennacherib campaigns against Judah. The account is recorded in Scripture. 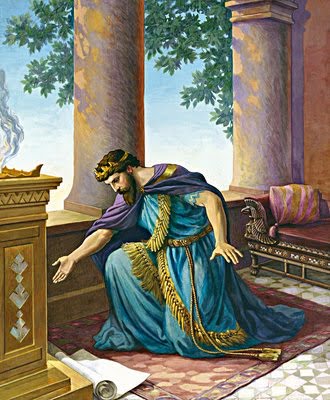 It is also recorded by Sennacherib himself in several ways. In his historical annals, discovered in the capital city of Nineveh, he boasts, “Forty-six of his [Hezekiah’s] strong walled towns and innumerable smaller villages in their neighborhood I besieged and conquered”. In Sennacherib’s palace at Nineveh he celebrates his defeat of the Judean city of Lachish by covering the walls of a central room of the palace with relief depictions of his siege and battle against the city.

Recent excavations at Lachish have uncovered the massive destruction debris of the city after it was burned by Sennacherib. But Jerusalem is miraculously spared. Sennacherib is able to boast only this: “As for Hezekiah the Judean, I shut him in his city like a bird in a cage”. There is no description of destroying Jerusalem, and no account of captives being taken into slavery.

It is true that Jerusalem was besieged, but the Bible records that the siege lasted for one day only, as the Angel of the Lord delivers Jerusalem. As Isaiah had predicted, “Therefore thus says the LORD concerning the king of Assyria: He shall not come into this city, or shoot an arrow there, or come before it with a shield, or cast up a siege mound against it. By the way that he came, by the same he shall return, and he shall not come into this city, says the LORD. For I will defend this city to save it, for my own sake and for the sake of my servant David” (Isa. 37:33-35, RSV).

Interestingly, only Lachish is prominently depicted in Nineveh, the Assyrian capital. Jerusalem is not found on the palace walls. Sennacherib could boast only of his defeat of Lachish. The showdown between the God of heaven and the gods of the Assyrians is demonstrated in the deliverance of His people. He sees the acts of aggression by Assyria. He hears the words of Hezekiah’s prayer. God acts in history.